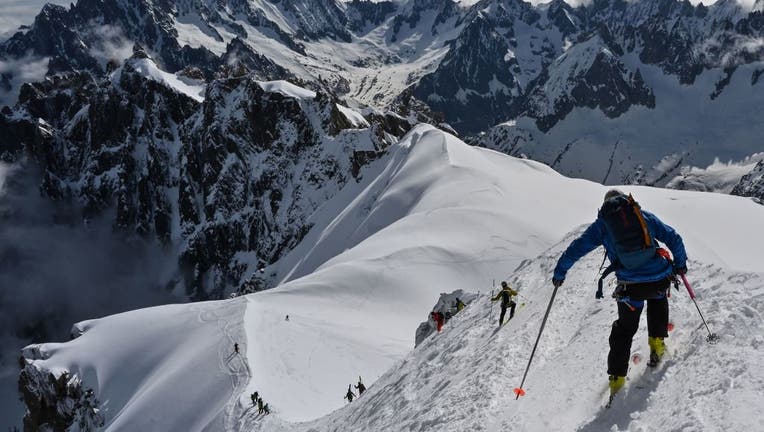 Mountaineers ski to the 'Vallee Blanche' a glacial valley located in the Mont-Blanc massif, from the 'Aiguille du Midi' peak in Chamonix, on May 16, 2020, on the first day of the reopening as France eases lockdown measures taken to curb the spread of

FRANCE - A mayor in France is demanding that any daring climbers looking to summit Mont Blanc, the tallest mountain in Europe, pay a deposit of €15,000 (or $15,300) should they need to be rescued or die in the attempt.

According to The Guardian, Jean-Marc Peillex, the mayor of Saint-Gervais-les-Bains, a town near France's border with Switzerland and Italy, says too many inexperienced climbers are risking their lives trying to get to the famous mountain's summit.

"The municipality of Saint-Gervais plans to take measures adapted to the irresponsibility of some and the risks they make rescuers run," Peillex said in a tweet.

"People want to climb with death in their backpacks," Peillex continued. "So let’s anticipate the cost of having to rescue them, and for their burial, because it’s unacceptable that French taxpayers should foot the bill."

Climbers can summit the highest peak in Europe via the Goûter Route, which can be accessed from Saint-Gervais-les-Bains. The route includes a challenging section that has been nicknamed the "Corridor of Death."

Local guides suspended operations along the route last month due to heavy rockfall.

Peillex's plan has not been met with opposition across the border in Italy, where Roberto Rota, the mayor of Courmayeur, a ski resort town which offers a different path to the peak, said he had no plan to restrict access.

"The mountain is not a property," Rota told the Corriere della Sera, an Italian newspaper. "We, as administrators, can limit ourselves to reporting sub-optimal routes' conditions, but asking for a deposit to climb to the top is surreal."