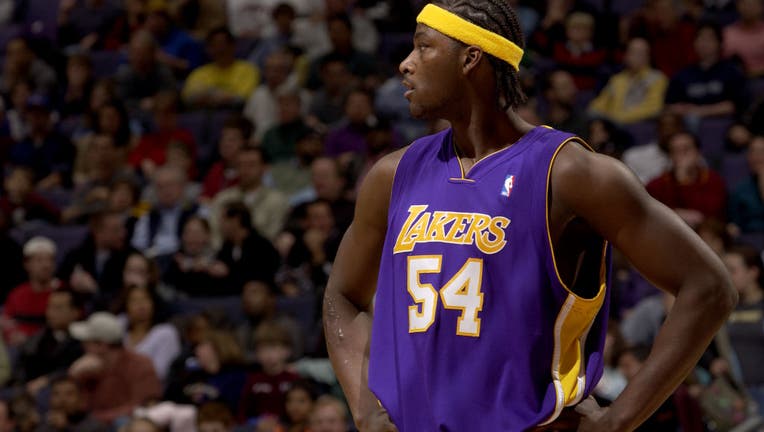 WASHINGTON, DC - DECEMBER 26: Kwame Brown #54 of the Los Angeles Lakers plays against the Washington Wizards on December 26, 2005 at the MCI Center in Washington, DC. NOTE TO USER: User expressly acknowledges and agrees that, by downloading and or us

Michael Jordan made Kwame Brown the No. 1 pick of the 2002 NBA Draft out of high school when the legendary player was running the Washington Wizards organization.

Brown did not live up to the selection and quickly became a journeyman forward who played for seven teams between 2001 and 2013. Over the last week, Brown had been in the middle of controversy after former Wizards star Gilbert Arenas took a dig at him in a recent podcast interview.

Arenas said on the "All The Smoke" podcast hosted by Matt Barnes and Stephen Jackson that Brown was a "show pony" and that being picked by Jordan didn’t exactly help his confidence.

"When you’re making [Brown] look little to his peers, he loses his confidence. So when I get there, he doesn’t have confidence. So, it’s trying to build this man-child up… I call him a show pony, he’s a show horse."

Arenas added that Brown could have been an Anthony Davis-type player.

Brown responded in an hourlong video posted on his YouTube channel. He responded to all three former players.

"I think you guys need to focus and channel that energy to some more real problems," Brown said. "And Stephen Jackson, maybe you can put that motherf--king blunt out and pull your pants up on you’re a-- and put that rag down and act like a grown-a-- man instead of a little-a-- boy."

He also described Barnes as "Becky with the good hair" who needed counseling and Arenas as being out of touch with his blackness. He said Arenas was the "whitest Black boy I’ve ever known."

Barnes appeared on ESPN and reacted to Brown’s remarks.

"I get where he’s coming from. He’s kind of been the butt of jokes coming into the league and not being able to live up to the No. 1 potential," he said. "I guess some stuff was said on the podcast… I didn’t say nothing or do nothing. If you want to be mad at anyone, be mad at MJ for drafting you number one."

Brown averaged 6.6 points and 5.5 rebounds in his NBA career.