President Biden: "They did it, God love 'em"

Despite a momentarily dead microphone, President Joe Biden enthusiastically returned to the stage at an event in Michigan to announce that the USMNT had beaten Iran in World Cup play.

LUSAIL, Qatar - Mexico fell heartbreakingly short despite a furious bid to save itself from World Cup elimination on Wednesday, after finally discovering its scoring touch in a 2-1 victory over Saudi Arabia.

Goals from Henry Martín and Luis Chávez were not enough to take El Tri to the round of 16 for the eighth straight time as Group C's second qualifying spot looked destined to be determined in perhaps the most painful way possible.

With just two minutes of stoppage time remaining at Lusail Stadium, the 2-0 lead against the Saudis meant Mexico was tied with Poland for the group's second qualifying spot. It and Poland were both set to finish on four points, had each scored two goals and conceded two – but the determination was to fall in favor of the European team as it had been issued five yellow cards to Mexico's seven across the three group games.

Those are the rules, once all other tiebreakers have been exhausted. What a way to go.

In the end, it didn't come to that. With Mexico piling men forwards in desperation, they were completely exposed at the back when Saudi Arabia mounted a counter-attack. Goalkeeper Guillermo Ochoa, so often the hero, was powerless to prevent Salem Al-Dawsari from sending Tata Martino's squad from the tournament.

It had been a wide-open game throughout, with both teams knowing that only a victory would likely be enough to give them a chance. That prompted a far more attacking and ambitious approach from Mexico head coach Martino, with the number of resulting chances perhaps leaving him to rue avoiding similar tactics earlier in the group stage.

Hirving Lozano was a nuisance to the Saudi defense throughout as Herve Renard's side struggled to recreate the form of their remarkable opening game victory over Argentina. 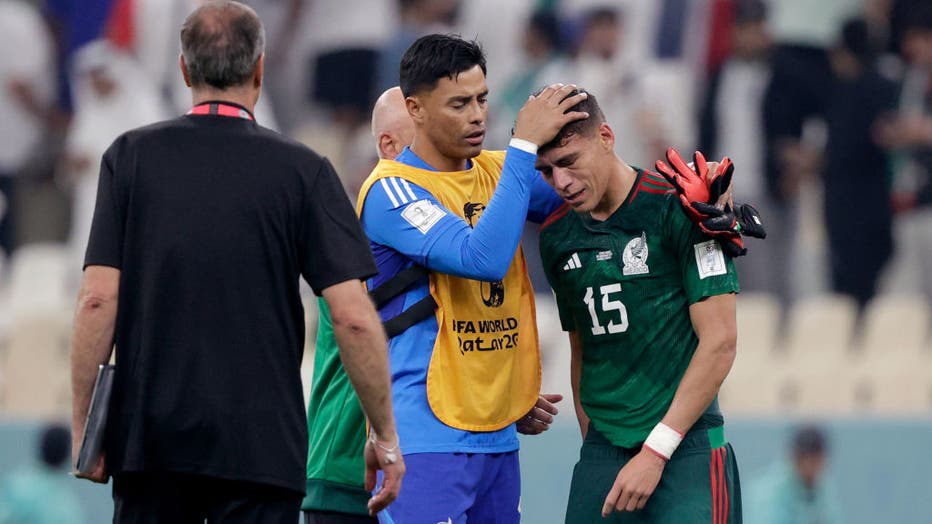 LUSAIL, QATAR - NOVEMBER 30: (L-R) Alfredo Talavera of Mexico, Hector Moreno of Mexico disappointed after the shutdown during the World Cup match between Saudi Arabia v Mexico at the Lusail Stadium on November 30, 2022 in Lusail Qatar (Photo by David

Things seemed to be in predictable order at halftime, with this game scoreless and no goals in Argentina's clash with Poland. Not for much longer.

After 47 minutes, Mexico grabbed a lifeline when César Montes flicked on a corner and Martín knocked it home from close range to give a glimmer of hope.

Minutes later, they got a second. Chávez, confident and unfazed, unleashed a thunderous free-kick from 30 yards out, a beautiful effort that scorched into the top corner and left goalkeeper Mohammed Al-Owais with no chance.

Now, news was beginning to filter through from across town and the Mexican fans were in full cry, learning that Argentina had scored on Poland once, then again, and that Mexico needed just one more.

It nearly came. Lozano beat Al-Owais on 56 minutes, but his effort was disallowed for offside. Uriel Antuna had a superb chance, but blazed a close range strike over the bar with 12 minutes left. And Antuna put the ball in the net once more, only for another offside flag.

If only for those darn yellow cards, things would have looked different. No wild late attack. Probably no Saudi goal. A potential last 16 showdown with France.

Instead, a ticket home, an ended journey. One that culminated with a flurry of excitement, but is the precursor to four years of regret.

GET UPDATES ON THIS STORY AT FOXSPORTS.COM