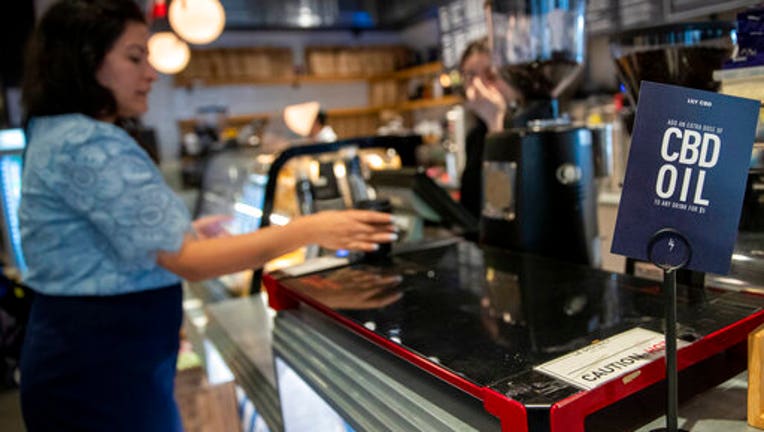 In this Tuesday, Oct. 8, 2019, photo a sign advertising shots of CBD oil available as an addition to beverages is seen on a countertop at at Le District in the Financial district of New York. Food and drink spiked with the cannabis derivative CBD is

NEW YORK (AP) — Food and drink are still being sold with CBD in New York City, months after health officials banned restaurants and cafes from selling edibles spiked with or accompanied by the trendy cannabis derivative because of safety concerns.

The city's health department surprised bakeries, restaurants, coffee shops, and other food sellers in February by telling them they were not permitted to put cannabidiol, or CBD, in prepared foods because it hadn't been approved as a food additive by the U.S. Food and Drug Administration. They also can't provide CBD to customers to add it themselves.

City health inspectors started seizing CBD-laced products, then backed off and gave food establishments until Oct. 1 to comply with the rules or face a fine of up to $650.

Yet on a recent spin around Manhattan in the days after that deadline passed, an Associated Press reporter was able to find CBD-infused coffee, cookies and other food items still for sale.

In the coffee bar at Le District, a fancy grocery near the World Trade Center, a sign read: "Add an extra dose of CBD oil to any drink for $5."

At the Fat Cat Kitchen cafe in Manhattan's East Village, freshly baked CBD cookies and brownies sat on display in a glass case.

CBD-infused drinks — including lavender matcha latte and white peach iced tea — were also on sale at the Forever Coffee Bar, near Columbia University's new satellite campus in upper Manhattan. Customers could get 10 milligrams added to their beverage for $2.50.

Owner Artem Arnopulo said he was aware the ban was in place. Health inspectors, in fact, had already visited another one of his Manhattan cafes in September and asked it to stop serving CBD-laced items.

"That was before the Oct. 1 deadline, and they said, no violation, no tickets. But it was a warning," Arnopulo said.

Still, he said he plans to keep serving CBD drinks until the inspectors show up at his other location and tell them to stop, too.

"We're waiting for them," he says with a grin. "I'm really a bit upset about it. If we cannot sell this anymore because CBD is kind of special and people are so excited about it."

The Fat Cat Kitchen's co-owner, C.J. Holm, declined to comment. A spokeswoman for Le District initially denied any CBD beverages were still for sale, then stopped responding to inquiries after being told an Associated Press reporter had been able to purchase a coffee with a packet of CBD that afternoon.

Products with CBD, a chemical in cannabis that doesn't cause a high, have become a fad across the country. The chemical is touted by sellers as being able to relieve pain, anxiety, sleeplessness and other conditions. Those claims are unproven, and questions remain about its safety.

The FDA has approved CBD as a treatment for rare, severe forms of epilepsy. The substance's status as a potential medicine, however, has triggered restrictions on its use as a food additive or dietary supplement. The agency is now exploring regulations that might allow it to be added to food at a later date. In the meantime, though, restaurants aren't allowed to add it to food, just like they wouldn't be allowed to add doses of painkillers or other medications.

Michael Lanza, a spokesman for the New York City Department of Health, told The Associated Press that no violations had yet been registered in the days after the October deadline. In the future, he said, health officials will confront owners of establishments about any CBD sales while conducting routine inspections of restaurants, delis and coffee shops.

The crackdown only applies to prepared food, not CBD oil sold by itself in shops and pharmacies.