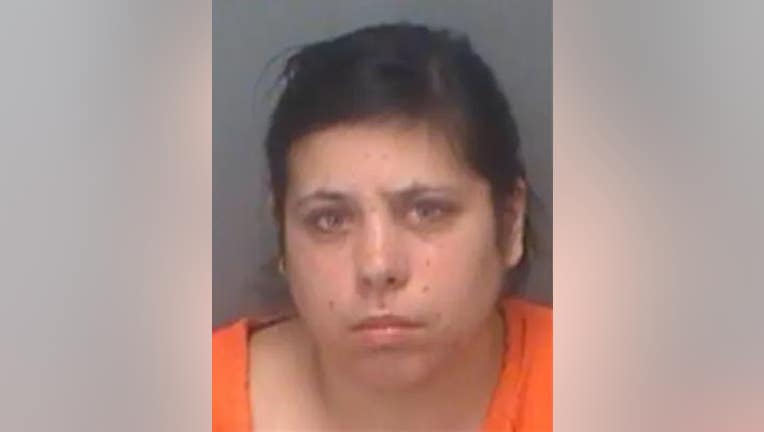 DUNEDIN, Fla. - A former preschool teacher in Florida was charged with felony child abuse after deputies said she was seen repeatedly punching a 4-year-old child in the head earlier this week.

Ashley Richards, 32, was arrested Wednesday at the Kindercare Learning Center in Dunedin, Florida after she was allegedly caught punching the child in the head more than once, authorities said.

A witness told the Pinellas County Sheriff's Office that she heard screams coming from the playground when she looked over and saw Richards punching with "both an open hand and a closed fist in the back of the head and side of the head," an arrest affidavit said.

The unidentified witness also told deputies that she saw Richards push the child to the ground, prompting the witness to pull out her cell phone and begin filming the remainder of the interaction, authorities said.

"Do you want me to hit you?" Richards can be heard asking the 4-year-old in the recording, the affidavit said.

Pinellas County Sheriff's Office deputies arrived at the scene and questioned both Richards as well as the 4-year-old.

Richards denied ever hitting or striking the child, though she did admit to putting her hand over his mouth to stop him from laughing, the sheriff’s office said.

The 4-year-old offered a different description of events.

The child told deputies that Richards struck him "as a form of punishment," hitting his head and eye after he was fighting with his brother, according to the arrest affidavit.

Kindercare Learning Center told WFTS the teacher was placed on administrative leave "until further notice" before saying the teacher had been fired amid an ongoing investigation.

"Nothing is more important to us than the safety of the children in our care," Kindercare Learning Companies said in the statement. "The teacher’s alleged actions do not reflect who we are or the training we provide our teachers. We are working with the police to determine what may or may not have happened."

Richards was initially booked into the Pinellas County Jail before she was released on a $5,000 bond, jail records indicate.

She was first hired as a preschool teacher at Kindercare Learning Center in March 2021.

Get updates from FOXNews.com