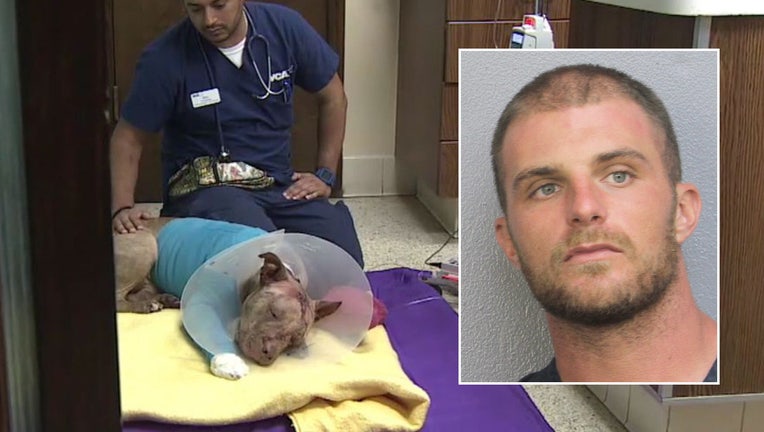 Brendan Evans will spend 10 years in prison after pleading guilty to animal cruelty in the death of Ollie the pit bull puppy.

HOLLYWOOD, Fla. - A Florida man accused of beating a pit bull puppy, stabbing it 50 times and stuffing it into a suitcase while the dog was clinging to life will serve 10 years in prison after admitting to the crime, his defense lawyer said Tuesday.

The South Florida Sun-Sentinel reports Brendan Evans, 35, of Hollywood agreed to plead guilty four years after the attack on Ollie the pit bull, according to his lawyer, Michael Gottlieb.

The dog died two days after being discovered.

From 2017: Dog stabbed, left for dead in suitcase in South Florida

Ollie the pit bull puppy was found beaten, stabbed and stuffed in a suitcase in Hollywood, Florida. Rescuers tried to save him but he died two days later. The attacked caused an international outcry.

PREVIOUS: Puppy dies after being beaten, stabbed and left in suitcase

The attack on the Ollie caused an international outcry.

Evans first denied being involved, but investigators found cat paws and rats with severed heads in his freezer, blood stains in his bathroom and dried blood and animal fur in his oven, the newspaper reported.

Evans has been held in jail since his arrest four years ago. He was initially charged with 17 counts of animal cruelty but prosecutors dropped 15 in exchange for the guilty plea, Gottlieb said.