The photo of a young Bunnell boy grieving as his dog gets put down is tugging at heartstrings around the world.

BUNNELL, Fla. - The photograph of a young Bunnell, Florida boy grieving as his dog gets put down is tugging at heartstrings around the world.

Maria Gay said she took the family’s 15-year-old poodle, Buffy, to the vet for teeth cleaning but was told it had advanced kidney failure and needed to be put down.  Her 8-year-old son, Robbie, said he wanted to be there in her last moments.

“So she wasn’t scared and she knew there was somebody there with her,” he told FOX35.

A picture of the moment has been shared nearly 200,000 times on social media. Robbie has now become a regular at the Flagler County Humane Society.  His mom said it’s become therapeutic. He takes a liking to unwanted dogs that are more difficult to adopt. 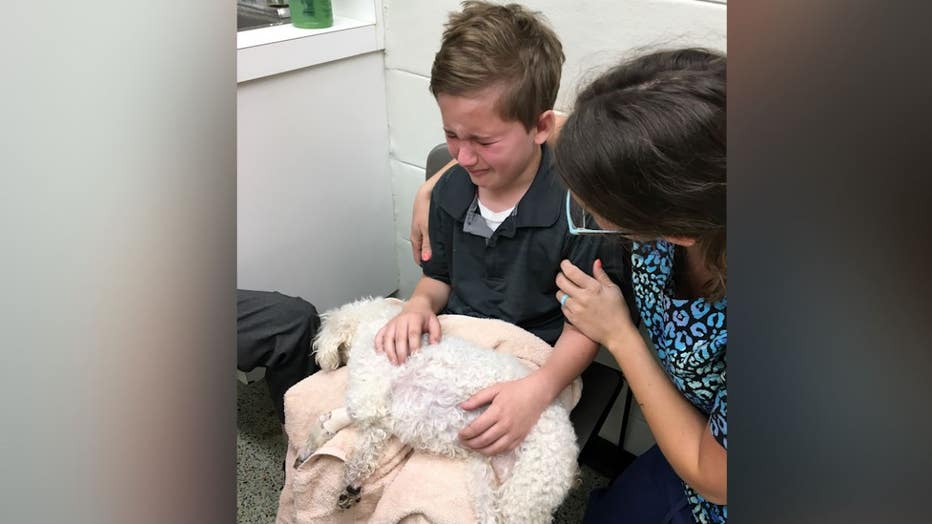 “I don’t like seeing them in the pound where they don’t have a family,” he said.

He says he knows what it feels like to be unwanted, moving through multiple foster homes.

“He was sheltered at the age of three and then he had six different foster placements,” said his mom Maria.

Maria and her husband officially adopted Robbie last summer. She said his background forced him to bury his emotions.

“In order to get through what he has been through he’s had to harden,” she said.

She said he let out those emotions while holding Buffy.

“It was the first time I really have seen him show grief,” said Maria.

Robbie said being at the shelter reminds him of his past.

“It’s like kids in foster care. The pound to dogs is like a group home to people,” he said.

His wish is that all dogs find a home like he did.