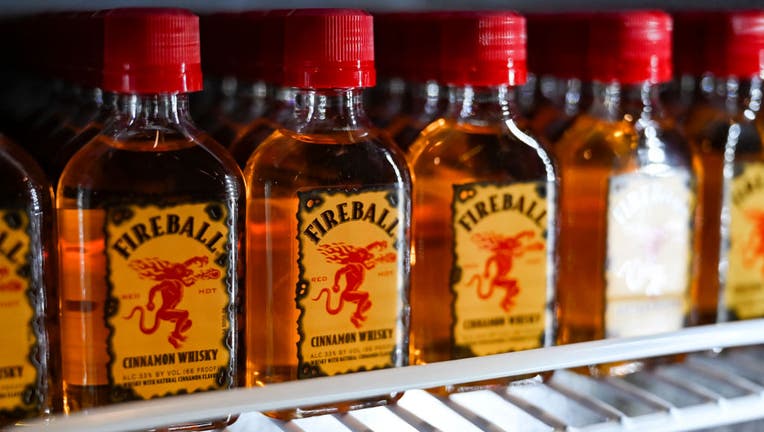 Miniature bottles of Fireball Whisky on display during the 2022 Bar & Restaurant Expo and World Tea Conference + Expo at the Las Vegas Convention Center on March 23, 2022 in Las Vegas, Nevada. (Photo by David Becker/Getty Images for Nightclub &am

LOS ANGELES - Fireball is under fire.

A class-action lawsuit filed by a woman in Illinois claims the shot-sized bottles of Fireball sold at gas stations and supermarkets actually contain no whisky at all, misleading customers who buy the brand's bottles. They are often sold outside liquor stores for 99 cents.

The lawsuit called the labels "almost identical," saying the manufacturer intended for consumers to make the mistake of what was inside of it.

The lawsuit goes on to explain the difference between the two liquids: whisky is a distilled spirit, while a malt beverage is a drink based on fermentation in which flavors and colors are later added.

"Using the words ‘With Natural Whisky & Other Flavors’ is a clever turn of phrase because consumers who strain to read this will [not] see how its ‘Natural Whisky’ is distinct from ‘Other Flavors,’" the lawsuit says. "They will think the product is a malt beverage with added natural whisky and other flavors."

"What the label means to say is that the product contains ‘Natural Whisky Flavors & Other Flavors,’ but by not including the word ‘Flavors’ after ‘Natural Whisky,’ purchasers who look closely will expect the distilled spirit of whisky was added as a separate ingredient," the lawsuit continues.

Fireball Cinnamon first debuted in 2020 and is marketed with the label on the bottle reading, "Malt beverage with natural whisky & other flavors and caramel color" on the label. Sales of malt beverages, which include hard seltzers, are not as tightly regulated as sales of distilled spirits.

While a specific number was not given in the filing for statutory and punitive damages, the filing said the amount would likely be more than $5 million.

"The bottles appear identical but for the word ‘Whisky’ on the front label, which most purchasers seeking alcohol will not even detect," the lawsuit says.

Sazerac has fired back though, saying the distinction between the two is clear despite the bottles and labels looking identical.

According to the Fireball Whisky website’s FAQ section, this is how customers can tell the products apart: