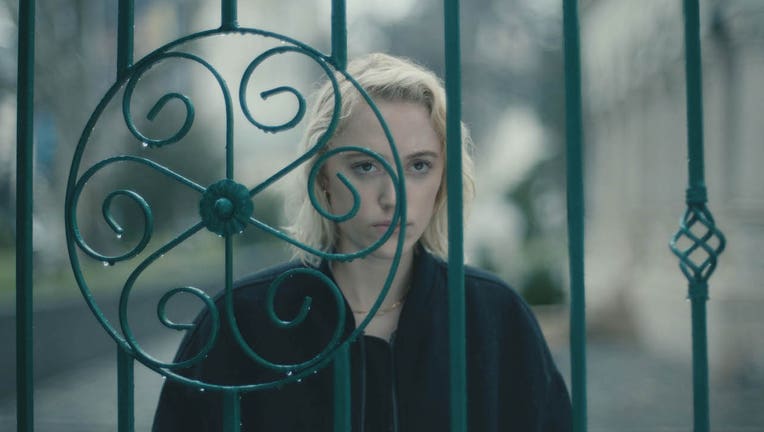 Maika Monroe appears in "Watcher" by Chloe Okuno, an official selection of the U.S. Dramatic Competition at the 2022 Sundance Film Festival. Courtesy of Sundance Institute.

CHICAGO - Editor's note: This review originally ran as part of our coverage of the 2022 Sundance Film Festival on Jan. 26, 2022. It has been expanded and republished in light of the film's debut in theaters.

The history of film is replete with thrillers featuring protagonists suffocating under the claustrophobic paranoia of surveillance, but Chloe Okuno’s debut feature "Watcher" effectively adds to the formula. Laced through Okuno’s evocative film is a sparse, chilling element of cultural alienation, adding yet more tension to scenes that speak to the specific anxieties of being a woman in public spaces.

About "Watcher": I always feel like somebody's watching me

"Watcher" follows a young actress named Julia (Maika Monroe) who moves to Bucharest with her boyfriend, only to find herself isolated and unable to speak the language. She soon becomes increasingly convinced she’s being watched by one of her neighbors, just as a serial killer begins to stalk the streets.

It’s the kind of film that would lend itself to tawdrier, skeezier tones, but Okuno keeps her cards close to the chest and plays it straight. Benjamin Kirk Nielson’s cinematography is David-Fincher-cold — slow zooms and out-of-focus background figures contribute to the titular feeling of voyeurism that both Julia and the audience are meant to feel. Nathan Halpern’s eerie, precise score keeps us off-center, and (when we finally get to see him) actor Burn Gorman makes perfectly unsettling use of his signature brand of fish-lipped English menace.

The problem, though, is that "Watcher" is ultimately a little too icy, too hazy, to keep it from feeling predictable and static.

See "Watcher" for: Chilling atmosphere and a strong lead performance

Apart from Gorman, the excellent Monroe doesn’t get much to work with in terms of scene partners; as Julia’s disinterested husband, Karl Glusman doesn’t make much of an impression. And the central conflict would be more compelling if the film left room for uncertainty about Julia’s situation and suspicions.

As is, "Watcher" is a brilliant showcase for Okuno’s command of atmosphere. Expect great things when she has more to lean on.

WATCH FREE ON TUBI: William Fichtner becomes obsessed with the woman next door in "The Neighbor"

Tubi is now the exclusive free-streaming home for the 2019 thriller "Coyote Lake," starring "Riverdale" standout Camila Mendes and Adriana Barraza, an Oscar nominee for her turn in 2006’s "Babel." Director Sara Seligman — working from a script co-written by Seligman and Thomas James Bond — follows Ester and Teresa (Mendes and Barraza), and mother and daughter who run a bed-and-breakfast near the border between the U.S. and Mexico. When two unwanted guests arrive, all hell breaks loose, and not only due to the chaos that arrives in their wake. It turns out Ester and Teresa have a big secret of their own, and it threatens to upend everything. TV-MA. 93 minutes. Camila Mendes, Adriana Barraza. Tubi is owned by the FOX Corporation.

"Coyote Lake" is streaming for free on Tubi.

How to watch "Watcher"

This taut horror-thriller is in theaters nationwide. It is not currently available to stream.