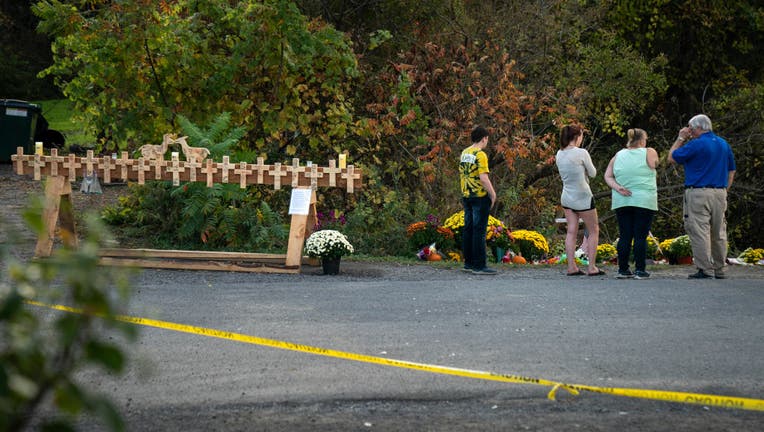 FILE -Mourners visit the site of a fatal limousine crash that killed 20 people near the intersection of Route 30 South and Route 30A, October 10, 2018 in Schoharie, New York. (Photo by Drew Angerer/Getty Images)

National Transportation Safety Board members are expected to vote later Tuesday on a final report on the deadliest transportation disaster in the United States in a decade. The crash killed 17 family members and friends, including four sisters and three of their husbands, along with the driver and two bystanders outside a country store.

“Seventeen young people made the smart, safe decision to arrange for sober transportation when celebrating," board member Michael Graham said during an online hearing. “They put their trust and safety into system designed to protect them, and it failed.”

Staff members told the board that the limousine's brake system was corroded and that the brake line was crimped, which would have restricted amount of fluid able to flow to the right rear brake. In addition, parts of the line were coated in brake fluid, indicating a leak.

A year after limo crash killed 20, memorial is unveiled

Staffers said properly functioning and well-maintained brakes would have been able to stop at the bottom of the hill.

The NTSB last month released a cache of documents indicating Hussain repeatedly changed the listed number of seats in the 2001 Ford Excursion limo and took other steps to avoid safety regulations.

The ill-fated limousine had been rented to take a group of young friends and siblings to a 30th birthday celebration at a brewery near Cooperstown on Oct. 6, 2018. The vehicle’s brakes failed on a downhill stretch of a state route in Schoharie, 30 miles west of Albany. It blew through a stop sign at a T intersection and crashed into a culvert shortly before 2 p.m.

Nauman Hussain, the operator of Prestige Limousine, faces 20 charges each of manslaughter and criminally negligent homicide. He has pleaded not guilty and was scheduled to stand trial in May, but the trial was delayed because of the pandemic. His lawyers have been meeting with prosecutors to discuss a possible plea deal.

Prosecutor: Repair shop billing not to blame for limo crash

The NTSB last month released a cache of documents indicating Hussain repeatedly changed the listed number of seats in the 2001 Ford Excursion limo and took other steps to avoid safety regulations.

In particular, Prestige took pains to avoid more stringent inspection rules intended to ensure a modified vehicle has the braking capacity and other requirements for carrying a heavier load, according to the NTSB documents.

Any vehicle with 15 or more seats is defined as a bus under state regulations and is subject to semi-annual inspections.

In the moments before the crash, a passenger texted, “the limo sounds like it is going to explode” and “it’s a junker.” Another driver described hearing a noise like a “jet plane” as the limo swerved around her car and sped through the intersection.