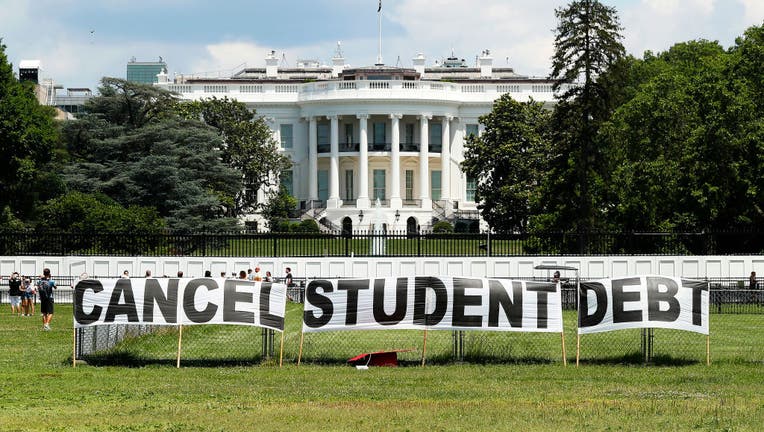 As college students around the country graduate with a massive amount of debt, advocates display a hand-painted sign on the Ellipse in front of The White House to call on President Joe Biden to sign an executive order to cancel student debt on June 1

San Francisco - During the pandemic, when record numbers of Americans lost their jobs, at least many folks could enjoy a pause on paying their federal student loans. In March of 2020, the US Department of Education stopped requiring payments on loans, and suspended all interest on loans.

But there remain only a few more months before borrowers must resume payments and interest rates are reinstalled: the Department of Education announced that student loan repayments will begin on January 31, 2022.

This grace period has offered an opportunity for folks to sidestep the interest rates that trap folks into paying off loans for a lifetime--if they have extra cash to spare.

On the other hand, people who lost their jobs may be unable to resume the level, or any level, of payment they could afford pre-pandemic. These people may be on, or enter into, an income-driven payment plan--their debt may be forgiven after 20 or 25 years of payment on such a plan.

"There are several options for continuing a kind of pause on your loans, though not with an interest waiver," said Mark Kantrowitz, a student loan expert. "In some cases, you might get the interest covered. These include deferment, such as economic hardship deferment, and the unemployment deferment. There's also general forbearances."

Kantrowitz also recommends borrowers use this pause period to pay off higher-interest debts, like credit cards, while they can.

Student loan payments are a hot topic at the moment on social media as President Joe Biden announced improvements to the federal student loan forgiveness program.

A growing movement of people, some of whom are members of a group called "The Debt Collective" are outright refusing to pay their loans. Members of this "nation's first debtors' union" aim to "build power with debt as leverage."

In practice, this looks like advocating for and organizing on behalf of "the cancellation and renegotiation of debts, access to publicly-funded goods (education, healthcare, housing, etc.), anti-racist economic policies, and much more," according to their website.

But there can be severe consequences for defaulting on federal student loans, said Kantrowitz. These include wage garnishment, leans on your house, getting professional licenses removed, a poor credit score and more.

"The government gets its money one way or the other," Kantrowitz warned. "They can also, with a court judgment, issue a bank levy to seize your bank accounts or brokerage accounts."

Jobless people were, and still are, so strapped for cash to pay bills during the pandemic that predatory lending practices have proliferated in recent months. Payday and auto title loans continue to imprison desperate people whose debts accumulate as they try to stay afloat.

And Americans are in more debt than ever: household debt hit a record $14.6 trillion last spring according to the Federal Reserve.

So, what can you do before the required payments resume?

Kantrowitz said that people who are on income-driven payment plans or pursuing public student loan forgiveness should not pay their loans during the pause.

"While it's true that if you do make payments, it's going entirely to principal, there are other things that you can do with the money that may be putting you in a better place such as, if you don't already have a emergency fund, or you have a small emergency fund, you could be building or bulking it up, because you might have a job now, but who knows what's going to happen in a month or two," he said.