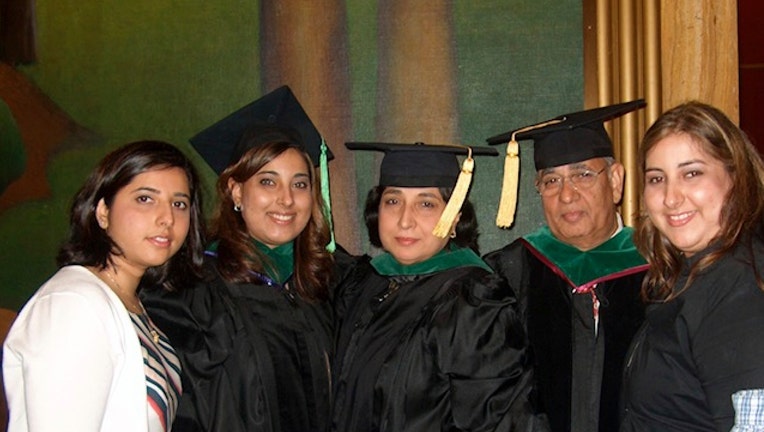 This undated photo provided courtesy of Anisha Khanna, shows, from left, Anisha, Sughanda, Kamlesh, Satyender and Priya Khanna. The northern New Jersey family of five doctors has lost two members to COVID-19. Satyender Khanna, who died at 77, was a p

NEW YORK (AP) — Priya Khanna may have been destined to practice medicine all along, and not necessarily because she grew up in a family of doctors.

The middle daughter of a surgeon and pediatrician who had immigrated from India and settled in northern New Jersey in the early 1970s, Khanna tested the waters in other fields before settling on the vocation that would define her adult life.

“She was a very kind person. She wouldn’t hurt a fly, and she couldn’t do a career that would require any sort of cutthroat attitude,” her younger sister, Anisha Khanna, recalled. “When she went through different career paths, I think she realized none of them fit her except for medicine.”

After contracting the coronavirus, Priya Khanna and her father, Satyender D. Khanna, both died days apart in April. They were down the hall from each other and in the same hospital where Priya had been born.

Along with three surviving family members who also became doctors, the Khannas touched an incalculable number of lives. Anisha Khanna and her mother, Kamlesh Khanna, operated a pediatric practice out of the family’s home in Glen Ridge, New Jersey, about 12 miles west of New York City. Eldest daughter Sughanda Khanna lives in Maryland and is an emergency-room physician, and Satyender Khanna was a practicing surgeon for more than four decades and was one of the first surgeons in New Jersey to perform laparoscopic surgery.

The family's influence was illustrated by the fact that one of the doctors who cared for Priya Khanna in her final days had studied under her several years earlier. Dr. Niki Kasinathan remembered her as “just the most pleasant person you would ever encounter.”

The family has lived in the same house Satyender and Kamlesh bought it in the early 1970s. Theirs was an arranged marriage that uprooted Kamlesh to northern New Jersey, where Satyender was a third-year surgical resident.

The early years were a challenge, she recalled. New Jersey’s currently thriving Indian community didn’t exist in those days, and Kamlesh struggled to adapt to her new culture and to the challenges of building a pediatric practice in a male-dominated field, all while raising young children. Her husband was always busy.

“He worked day and night, he took every emergency, every difficult case he could,” she said. “He was a very good father but not like today’s fathers, changing diapers, giving milk to the baby. He loved his daughters to death, and he gave them everything he could — but he worked first.”

Sughanda idolized her father and wanted to become a surgeon, her mother recalled. Priya considered law or business but decided on medicine and eventually specialized in nephrology, the study of kidney diseases. Anisha followed in Priya's footsteps to nearby Montclair Kimberley Academy and Drew University, and then to medical school in Kansas City.

“Our parents were our inspirations, and I went into my profession because of my mom, who is a very strong woman,” Anisha said. "But Priya was also someone I looked up to a lot because she was my big sister and she always protected me, and I miss that.”

Satyender began feeling ill in mid-March and a week later was taken by ambulance to Clara Maass Medical Center, a small community hospital in Belleville, outside Newark. Kamlesh was able to visit with him for a few minutes, clad in full protective gear, for what turned out to be the last time.

Priya, who suffered from an auto-immune disorder, had been self-isolating at the family home but soon began to exhibit symptoms. When she worsened, she was taken to the hospital and was put on oxygen. By the time Kasinathan saw her former mentor, Priya was awake but having difficulty breathing and unable to carry on a conversation, though she still managed to send texts to other doctors to check up on some of her patients.

“It was devastating to have someone who had been involved in your training and to see them on the other end,” Kasinathan said. “One of the things about being a doctor is that you know what’s really happening, and I think she was in tune with what the reality of the situation was, that if she went onto a ventilator she wasn’t going to get off it.”

Anisha and her sister and mother were in contact with Priya via FaceTime nearly nonstop the first several days; their father was put on a ventilator within two days of being admitted and was unable to communicate with them as he lay dying. After five days, Priya also was intubated.

The sisters took turns keeping Priya company. Anisha shared storytime with her 3-year-old, and Sughanda asked her to imagine herself at the beach, her favorite place to be.

“She said, ‘Don’t worry, we’re right here, we’re holding your hand, we’re putting your feet in the water, you’re feeling the sun and the sand,’” Anisha said. “I don’t know how much she heard.”

Priya spent 10 days on the ventilator and died on April 13, at 43. Her father passed away on April 21, never knowing his middle daughter had preceded him in death. Five days earlier, he and Kamlesh would have celebrated their 50th wedding anniversary. He was 77.

“This disease was so cruel, we couldn’t even be with them or hold their hand or comfort them,” Anisha said. “And my sister was such a gentle soul, I think that would have mattered a lot with her.”

EDITOR'S NOTE: This is part of an ongoing series of stories remembering people who have died from coronavirus around the world.