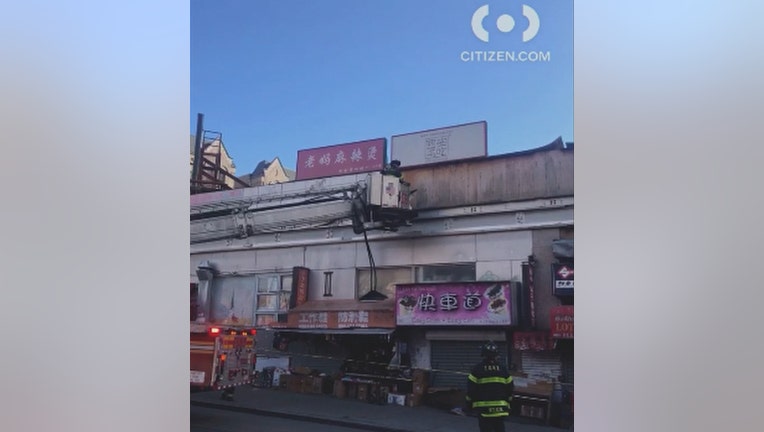 Firefighters examine a building's facade in Flushing, Queens, after a piece of falling plywood killed a woman on the sidewalk, Jan. 16, 2020. (Courtesy of Citizen.com)

NEW YORK - An aluminum-covered plywood panel broke away from the façade of a commercial building in the busy shopping district in Flushing, Queens, on Thursday and fell onto a pedestrian below, killing her, officials said.

Police officers, firefighters, and emergency medical personnel responded to 41-28 Main Street just before 10 a.m. and discovered the wounded pedestrian, who was unconscious and unresponsive. EMS brought the woman to New York-Presbyterian Hospital/Queens where she died, police said.

The NYPD identified the woman as Xiang Ji, 67, of Westbury, New York.

Forensic engineers and inspectors from the Department of Buildings responded to the site and ordered the property owners to "immediately erect a sidewalk shed around the building," the department said in an email to FOX 5 NY.

The building has more than a dozen open violations related to illegal work without a permit, unpermitted business signs, and illegal occupancy, according to DOB records. The facade was not cited in any of the violations, though.

The NYPD and DOB are investigating.

"Following our full investigation, we will take aggressive enforcement actions against responsible parties as warranted," the DOB added.

A wind advisory was in effect in New York City on Thursday and the DOB issued a reminder to property owners, work crews, and others to prepare for the wind. However, it is not clear if the weather was a factor in the plywood panel's fall.