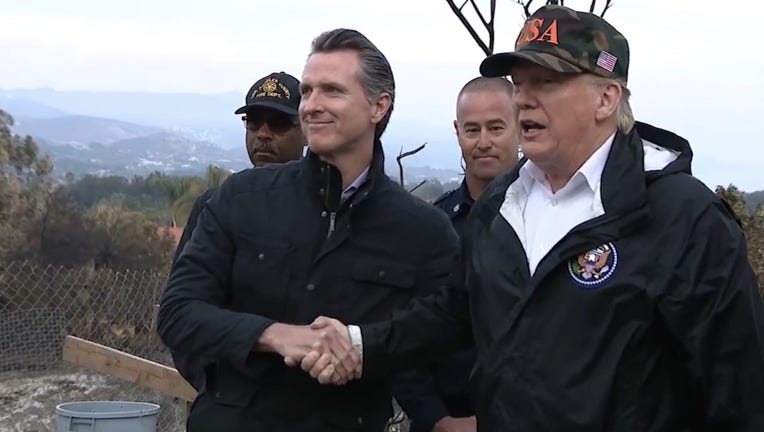 LOS ANGELES - White House officials exclusively tell FOX 11 Los Angeles that President Trump will visit California on Monday where he will be briefed on the state's wildfires.

He will join local and federal fire and emergency officials.

He's expected to visit McClellan Park in Sacramento County, a community that in recent weeks has served as a base for CALFire operations.

Back on August 14, The President has approved a Presidential Major Disaster Declaration for California.

White House Deputy Press Secretary Judd Deere told FOX 11: “Since mid-August, President Trump and Governor Newsom have spoken by phone and the White House and FEMA have remained in constant contact with State and local officials throughout the response to these natural disasters. The President continues to support those who are battling raging wildfires in a locally-executed, state-managed, and federally-supported emergency response."

On Friday, Governor Newsom told reporters that he had a 30 minute phone call with President Trump that he described as productive.

Deere also said that "the Administration has also approved 10 Fire Management Assistance Grants and 24 grants for other western states, which provides a 75% Federal cost share for the mitigation, management, and control of fires. More than 26,000 federal personnel and 230 helicopters have been deployed to the region to fight these fires."

President Trump visited California after the 2018 wildfires impacted Northern and Southern California, and signed an executive order to improve Conditions and Reduce Wildfire Risk. On that trip, he toured the state with then Governor Jerry Brown and then Governor-Elect Gavin Newsom. It is unclear if Governor Newsom will join the President for his latest West Coast trip.

In the coming days, the President also has appearances scheduled in Arizona and Nevada.

Deere said the President and his Administration is monitoring and offering support for all the fires burning across the region "including Colorado, Montana, Oregon, Utah, Washington and Wyoming. This includes an additional 24 Fire Assistance Management Grants for those six States.”

On Friday, President Trump tweeted out this:

"THANK YOU to the 28,000+ Firefighters and other First Responders who are battling wildfires across California, Oregon, and Washington. I have approved 37 Stafford Act Declarations, including Fire Management Grants to support their brave work. We are with them all the way!"