Did a man accused of murdering a popular Hollywood Hills family therapist this past weekend appear on a local comedy podcast just weeks ago? The show's producer says yes and they have the video to back it up.

HOLLYWOOD, Calif. - The ex-boyfriend of a prominent Hollywood family, marriage and sex therapist was arrested in connection with her murder, Los Angeles police said.

Gareth Pursehouse, 41, was arrested Saturday afternoon and booked for the murder of Doctor Amie Harwick, according to jail records and the LAPD. He is being held on $2 million bail.

Harwick, 38, apparently plummeted from a third-floor balcony of her Hollywood Hills home to her death.

Around 1:15 a.m. Saturday, LAPD officers responded to a call about a woman screaming in the 2000 block of Mound Street in the Hollywood Hills, the department said.

Shock and sadness over the death of a popular Hollywood therapist. She was found critically injured at her home Saturday and later died. Her ex-boyfriend has been arrested and accused of her murder.

When officers arrived, they were met by Harwick's roommate, who was in the street. He told police that Pursehouse had broken into their home and that Harwick was being assaulted inside the residence. The roommate had jumped over a wall of the property and ran to a neighbor's home in order to call for police.

Responding officers found Harwick lying on the ground beneath the third-story balcony, the LAPD said. She was gravely injured and unresponsive. Paramedics took her to the hospital, where she later died.

The LAPD investigation found evidence of a forced entry and struggle inside the home. A canvass of the area found additional evidence of the killer entering the property and leaving.

Detectives learned that not long before her death, Harwick had talked about her fear of Pursehouse, her former boyfriend, police said. Harwick and Pursehouse recently had broken up and she filed a restraining order against him, but it recently expired.

Agents from the FBI-LAPD fugitive task force arrested Pursehouse outside his home in the 8100 block of Cabora Drive in Playa del Rey. 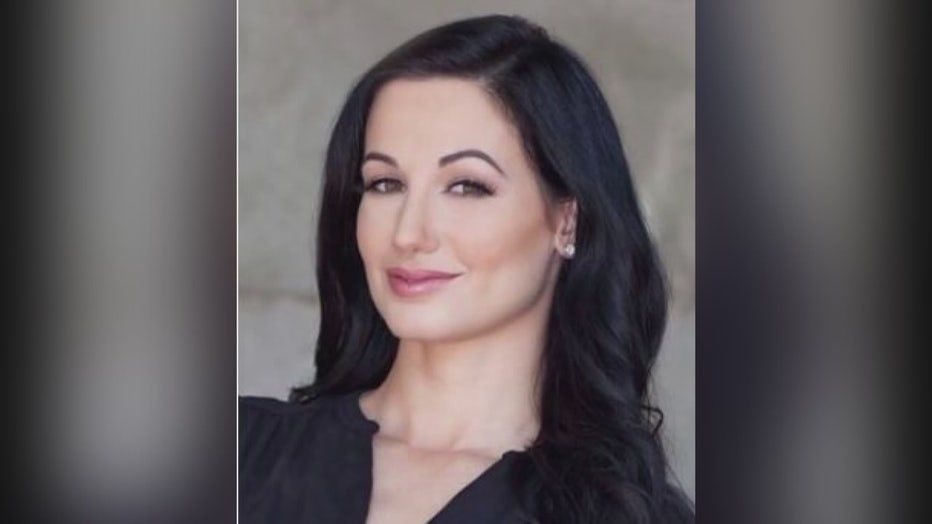 Harwick was notably the ex-fiancée of comic and "The Price Is Right" host Drew Carey. Harwick and Carey got engaged in 2018 after they began dating in 2017. However, the couple called off their engagement less than a year later. A representative for Carey described the split as "very amicable."