The video was released hours after Kalush Orchestra brought Ukraine its third Eurovision win, pulling ahead of Britain in the grand final after the votes from some of the estimated 200 million viewers from 40 participating countries were tallied.

Band members posed for photos and signed autographs outside their Turin hotel Sunday, en route to an interview with Italian host broadcaster RAI. They must return to Ukraine on Monday after being given special permission to leave the country to attend the competition.

Russia was barred from the Eurovision Song Contest this year after its Feb. 24 invasion of Ukraine, a move organizers said was meant to keep politics out of the contest that promotes diversity and friendship among nations.

But politics nevertheless entered into the fray, with Kalush frontman Oleh Psiuk ending his winning performance Sunday night with a plea from the stage: "I ask all of you, please help Ukraine, Mariupol. Help Azovstal right now!" he said, referring to the besieged steel plant in the strategic port city.

Ukrainian President Volodymyr Zelenskyy hailed the victory, saying he hoped Ukraine would be able to host the contest next year and predicting the "victorious chord in the battle with the enemy is not far off."

"Stefania" was penned by lead singer Psiuk as a tribute to his mother, but since Russia’s invasion it has become an anthem to the motherland, with lyrics that pledge: "I’ll always find my way home, even if all roads are destroyed."

The new music video features women soldiers carrying children out of bombed-out buildings, greeting children in shelters and leaving them behind as they board trains. The video credits said it was shot in towns that have seen some of the worst destruction of the war, including Bucha, Irpin, Borodyanka and Hostomel.

The video was clearly made before the band left Ukraine as it features band members and — presumably — actors performing in the rubble. 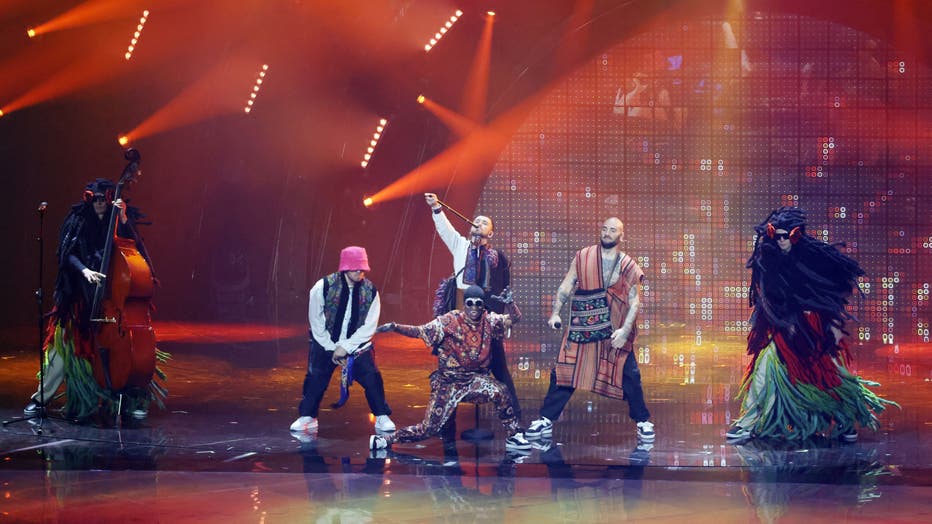 TURIN, ITALY - MAY 14: The Kalush Orchestra, representing Ukraine, perform on stage during the Grand Final show of the 66th Eurovision Song Contest at Pala Alpitour on May 14, 2022 in Turin, Italy. (Photo by Stefania D'Alessandro/Getty Images)

"Dedicated to the brave Ukrainian people, to the mothers protecting their children, to all those who gave their lives for our freedom," it said.

Kalush Orchestra includes folklore experts and mixes traditional folk melodies and contemporary hip hop in a strong defense of Ukrainian culture that has taken on added meaning as Russia has sought falsely to assert that Ukraine’s culture is not unique.

RELATED: U2’s Bono, The Edge do surprise concert for Ukrainian troops in Kyiv

At an early Sunday press conference after the contest, Psiuk in his trademark pink bucket hat said the win was particularly meaningful given the war and the popular support that pushed Ukraine to victory.

"We are here to show that Ukrainian culture and Ukrainian music are alive, and they have their own and very special signature," Psuik said. 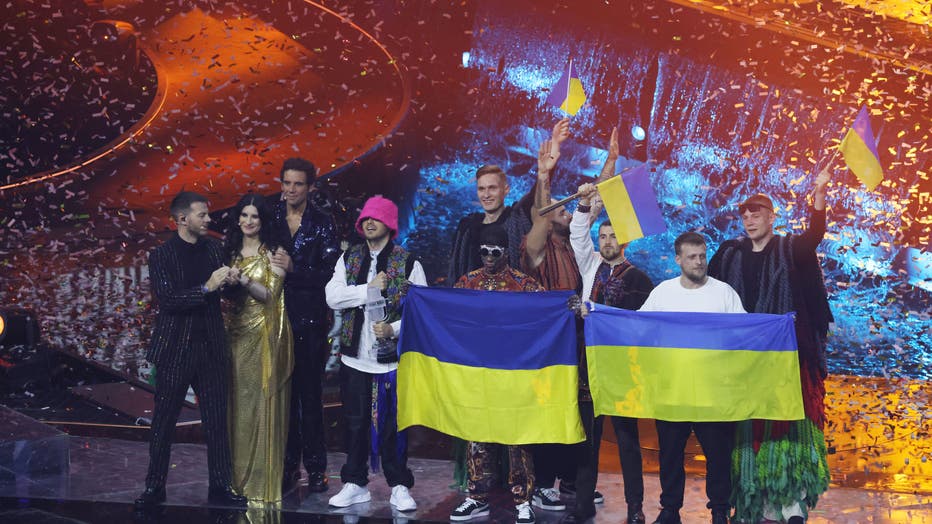 TURIN, ITALY - MAY 14: The Kalush Orchestra, representing Ukraine, on stage during the Grand Final show of the 66th Eurovision Song Contest at Pala Alpitour on May 14, 2022 in Turin, Italy. (Photo by Stefania D'Alessandro/Getty Images)