He said he wants Congress to do more than offer "thoughts and prayers" to the victims of gun violence.

Because substantial changes to gun laws have always met fierce Republican resistance in Congress, Biden said he asked Attorney General Merrick Garland to prioritize gun violence and help him with concrete actions the president could take without Congress. 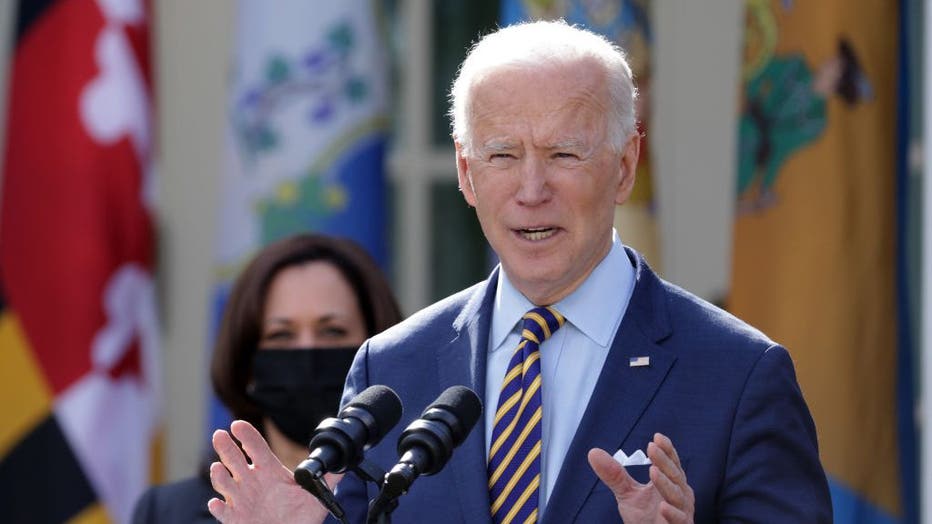 President Joe Biden speaks during an event on the American Rescue Plan in the Rose Garden of the White House on March 12, 2021, in Washington, DC. (Photo by Alex Wong/Getty Images)

Biden first spoke of regulating ghost guns, which are homemade firearms that often lack serial numbers authorities would use to trace them. They’ve increasingly turned up at crime scenes, and federal agents have found them in undercover purchases from gang members and other criminals.

There’s no federal requirement for ghost gun buyers to undergo a background check, but Biden’s actions would change that.

Biden said he’ll also tighten regulations on pistol-stabilizing braces. The president said the brace makes the pistol more lethal and "a hell of a lot more accurate." He wants to designate pistols with the brace as short-barreled rifles, which would require owners to have a federal license.

The braces came under scrutiny last month after a gunman allegedly used a braced pistol to kill 10 people at a grocery store in Boulder, Colorado.

Part of Biden’s action asks Congress to pass an appropriate national red flag law that would allow family members or law enforcement to petition for a court order temporarily barring people in crisis from accessing firearms if they present a danger to themselves or others.

And he hopes Congress will incentivize states to pass similar laws. Biden praised the House for passing bills that would close loopholes in America’s gun legislation.

Democrats control both chambers of Congress, but the slim Senate advantage likely wouldn’t be enough to pass the bills that would end the loopholes.

Republicans are expected to oppose many, if not all, of Biden’s measures. The party has positioned itself as defender of the Second Amendment and tried to paint the opposition as gun confiscators. Before he went into his plans, Biden dismissed the notion that his measures were a threat to the Second Amendment — calling it a "phony argument."

President Joe Biden gave remarks the day after 10 people were killed in a mass shooting at a King Soopers in Boulder, Colo. He also called for the Senate to pass recent House-passed bills on gun control.

While enhanced background checks are generally popular with the American public — even with some conservatives — Congress has so far not been able to find compromise on gun control as a whole, thus the president’s reliance on executive action.

But of all the ideas Biden presented, the removal of gun manufacturers’ immunity to lawsuits sits closes to his heart, he said.

"If I get one thing on my list, the Lord came down and said ‘Joe, you get one of these,’ give me that one," Biden said. "Because I tell you what: There would be a come to the Lord moment these folks would have real quickly."

Thursday’s news conference also served as an introduction of David Chipman, Biden’s nominee to direct the Bureau of Alcohol, Tobacco, Firearms and Explosives (ATF). Chipman is a former federal agent and adviser to the gun-control group Giffords. He spent 25 years with ATF where he worked to stop a trafficking ring that sent illegal guns from Virginia to New York.

Gun-control advocates have long stressed how crucial the director of the ATF is in enforcing gun laws. John Feinblatt, president of Everytown for Gun Safety, lauded Chipman as an "invaluable point person" in the fight against illegal gun trafficking.

"Each of these executive actions will start to address the epidemic of gun violence that has raged throughout the pandemic, and begin to make good on President Biden’s promise to be the strongest gun safety president in history," Feinblatt said.