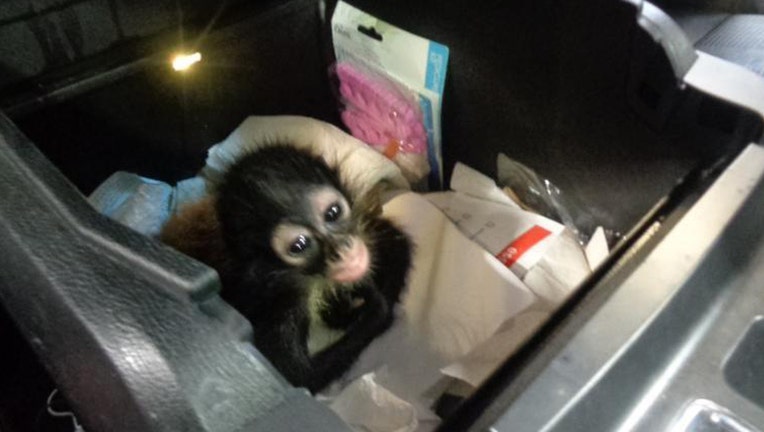 U.S. customs officers found this spider monkey hidden inside the center console of a truck at a border crossing between Mexico and Texas. (U.S. Customs and Border Protection)

HIDALGO, Texas - Officers with U.S. Customs and Border Protection giving a pickup truck a closer look at the border with Mexico came across a tiny endangered primate. A spider monkey was hidden inside the truck, officials said.

"Finding this monkey is certainly unusual but not a first for our officers at Hidalgo," Port Director Carlos Rodriguez said in a statement. "Our officers normally discover prohibited agriculture products, merchandise, currency, weapons and narcotics but on occasion they encounter people attempting to smuggle exotic animals as well."

A 23-year-old man from Pharr, Texas, coming into the U.S. at the Hidalgo-Reynosa International Bridge on June 23 in a 2015 Ford F-150 pickup truck was flagged for a secondary inspection. Officers "discovered a young spider monkey hidden inside the center console and cautiously removed it, placing it in an animal container," CBP said in a news release.

Officers called in an agent with the U.S. Fish and Wildlife Service, who took the monkey to be quarantined. If the monkey clears quarantine, it may be donated to the Gladys Porter Zoo in Brownsville, Texas, federal officials said.

Spider monkeys, which are native to the tropical forests of Central America and South America, are considered endangered under the Endangered Species Act, CBP said.

This story was produced in New York City.