As of 5:30 p.m. ET, Biden had 302 electoral votes to President Donald Trump’s 232. Biden secured his victory after California electors put him over the top with 55 electoral votes. Electors from several other states also cast their electoral votes for Biden, including Nevada, New Hampshire and Vermont.

Trump has refused to concede the election and continues to make unsupported allegations of fraud.

Fueled by President Donald Trump, some Arizona Republicans continue to question Biden’s victory in the state. Trump backers have filed multiple lawsuits trying to have the Arizona results set aside, but state and federal courts have rejected all but one of them.

There have been concerns about safety for the electors, virtually unheard of in previous years. In Michigan, lawmakers from both parties reported receiving threats. Legislative offices there were closed Monday over threats of violence. The 16 electors were to meet in the Senate chamber in a ceremony headed by Democratic Gov. Gretchen Whitmer. Biden won the state by 154,000 votes, or 2.8 percentage points, over Trump.

There have been concerns about safety for the electors, virtually unheard of in previous years. In Michigan, lawmakers from both parties reported receiving threats. Legislative offices there were closed Monday over threats of violence. The 16 electors were to meet in the Senate chamber in a ceremony headed by Democratic Gov. Gretchen Whitmer. Biden won the state by 154,000 votes, or 2.8 percentage points, over Trump.

Georgia state police were out in force at the state Capitol in Atlanta before Democratic electors pledged to Biden met. There were no protesters to be seen less than a hour ahead of the meeting.

In November’s general election, Americans selected Joe Biden to be the next president and Kamala Harris to be his vice president. Since then, Biden has been operating as president-elect and laying the groundwork for his administration.

Biden earned 306 electoral votes to Trump’s 232. It’s the same margin that made Trump the 45th president in 2016’s election.

In accordance with Title 3, Section 7 of the United States Code, the Electoral College gathers following the second Wednesday of December.

Vermont's electors were the first in the nation to vote, giving the state's three electoral votes to Biden and Harris. Some meetings began at 10 a.m. ET, while many will convene in the afternoon. Hawaii’s electors will cast votes at 7 p.m. ET.

Breakdown on the voting process

The United States has a total of 538 electoral votes up for grabs — equal to the number of representatives and senators the states have in Congress. Each state is guaranteed at least one seat in the House and two in the Senate.

Each elector casts a single vote for president and vice president, in accordance with the 12th Amendment.

Most states welcome their electors into their Capitol, while a few meet in other government buildings — such as the secretary of state’s office, the governor’s office or the office of the director of elections.

Electors are usually selected by a state’s branch of a political party. They’re often party loyalists, state officials or people personally affiliated with the nominee, according to the National Archives.

The meetings of the electors vary from state to state. Larger states, like New York and Pennsylvania, have previously appointed officers to preside over their electoral colleges.

But states with smaller populations wouldn’t be as likely to do the same.

RELATED: What happens at the Electoral College meeting?

Copies are made and the votes are then sealed. One copy is sent to the president of the senate, who is Vice President Mike Pence.

Other copies are sent to the state's secretary of state, the National Archives and Records Administration, and the presiding judge in the district where the electors meet.

During the first week in January — approximately six weeks after the presidential elections — the acting vice president presides over a meeting of the House and Senate, where the electors’ votes are counted.

The electoral votes won’t be counted until Pence presides over a joint session of Congress on Jan. 6. Even so, the outcome has already been determined.

RELATED: The Electoral College: How does it work? Why do we have it? Could it ever change? Here’s what you need know

Trump gave the GSA the go-ahead on Nov. 23, but has yet to concede the race.

The impact of faithless electors

There is no constitutional requirement for electors to vote for the winner of their state’s popular vote.

“My research over the past five presidential elections finds that electors are regularly lobbied to change their votes in the time between the general election is held and when they cast their votes in the Electoral College,” Robert Alexander, a political science professor and author of ‘Representation and the Electoral College’, said. “Almost all electors were lobbied in 2008 and in 2016. Some of that lobbying is very aggressive as several electors reported getting death threats.”

The founding fathers meant for presidential elections to be handled at the state level. Keeping with that, many states have laws on the books requiring electors to honor their pledge to the state’s popular vote winner.

It is rare, but there have been cases of electors breaking their commitment to a candidate in the December meeting. These are known as faithless electors.

Over the course of American election history, a total of 165 electors have cast “deviant votes” of some sort.

According to FairVote.com, a nonpartisan organization dedicated to electoral reform, 90 electors have cast deviant votes which were not ordinary votes for the presidential nominee of the elector’s political party. 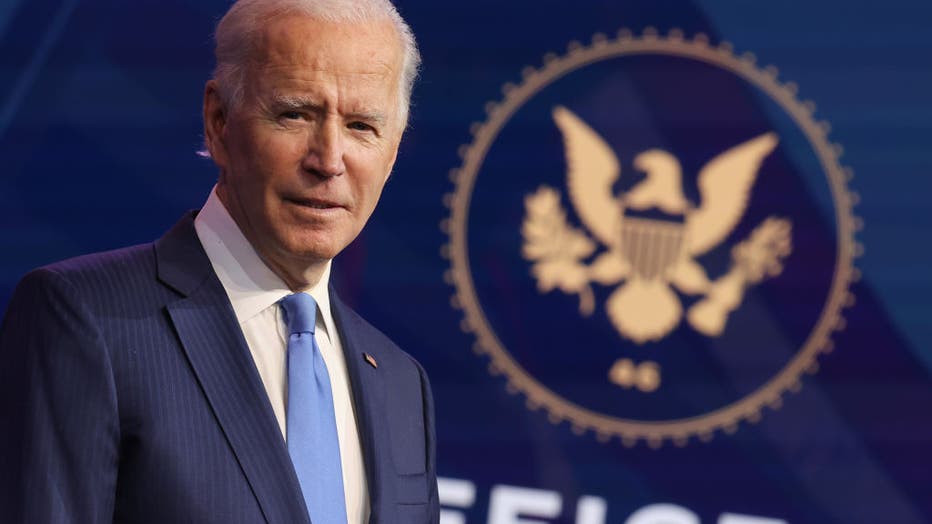 President-elect Joe Biden speaks during an event to announce new cabinet nominations at the Queen Theatre on Dec. 11, 2020 in Wilmington, Delaware. (Photo by Chip Somodevilla/Getty Images)

Meanwhile, there have been 75 instances of deviant votes for vice president.

More than two-thirds of the 90 deviant presidential votes cast were for another candidate due to the death of the nominee.

Of the remaining 27 deviant votes, 24 were cast for another candidate (three were canceled or retracted due to the operation of state law).

But perhaps the most notable instance of faithless electors was in 2016, when 10 electors cast votes for other candidates.

“Although it did not impact the outcome, the 2016 election between Republican nominee Donald Trump and Democratic nominee Hillary Clinton included an abnormally high number of electors breaking with their political party and casting a deviant vote for President,” FairVote said.

In fact, it was the largest number of individual deviance by electors in a U.S. presidential election.

“There were ten electors in 2016 that tried to cast faithless votes. Seven of them were successful. Two were Republicans; the rest were Democrat,” Alexander explained. “They were unsuccessful in their attempt, but for many Americans, that is denying them the right to vote what they thought they would get back in early November.”

Of the seven faithless electors in 2016, four came from Washington, a state won by Clinton.

Three voted for former Secretary of State and Republican Colin Powell, while a fourth cast a ballot for a Native American elder named Faith Spotted Eagle.

Bret Chiafalo, who voted for Powell, said he was “ready to pay a fine of up to $1,000 if the state decides to enforce the law on faithless electors,” according to the Associated Press.

One faithless elector, David Mulinix, a Democrat from Hawaii, cast his vote for Bernie Sanders instead of Hillary Clinton.

While the 2016 electors cast a significantly higher number of deviant votes in comparison to previous election years, it also illustrates that those who voted against their state’s choice did not vote for the opposing party’s presidential candidate (i.e. voting for Clinton instead of Trump and vice-versa).

In July 2020, the Supreme Court ruled unanimously in July 2020 that states can require presidential electors to back their state’s popular vote winner in the Electoral College.

A state may instruct “electors that they have no ground for reversing the vote of millions of its citizens," Justice Elena Kagan wrote in her majority opinion. "That direction accords with the Constitution — as well as with the trust of a Nation that here, We the People rule.”

The Supreme Court affirmed that state laws binding electors were constitutional. This ruling left in place laws in 33 states and the District of Columbia that bind electors to vote for the popular-vote winner.

“While there are 33 states (plus DC) that have laws requiring pledges of electors, there are only 14 states that have a sanction to remove an elector if they vote contrary to expectations,” Alexander explained.

“So while most have pledges, less than half have any means of forcing electors to vote for the winner of the popular vote in their states. This amounts to 121 of the 538 electoral votes. So technically over 400 electors could go rogue if they chose to do so,” Alexander said.

While faithless electors have existed in the past, they have never been critical to the outcome, nor have they had the capacity to overturn an election.

But deviant voting among electors has become increasingly concerning in recent years, especially after 2016’s presidential election. Many wonder if 2020’s race could be altered by faithless electors.

Biden and Trump’s projected electoral vote count stands at 306 for Biden compared to 232 for Trump, according to FOX News projections. A closer race could be a bigger concern, and it is not common for faithless electors to cast a vote for the opposing party’s candidate. In fact, it has only happened once before in American election history, according to FairVote.

“Faithless electors have never changed the outcome of a presidential election. To date, only one elector has cast a vote for the opposite party’s nominee instead of his own in a close contest. In the 1796 election - the very first contested presidential election - Samuel Miles, a Federalist elector from Pennsylvania, voted for Democratic-Republican candidate Thomas Jefferson instead of Federalist candidate John Adams,” FairVote said.

And with more states required to side with their state’s popular vote result due to this year’s Supreme Court ruling, the option is becoming increasingly difficult and looked down upon.

“It happens infrequently, but our studies have found that a number of electors actually consider that as an option more than most would think,” Alexander said. “On average, my research finds that around 10% of electors give some consideration to voting contrary to expectations.”

“Most are strong party loyalists, but they may have issues with their party's candidate or they may simply wish to use the opportunity as a platform for a pet issue. Of course, very few choose to go rogue and I expect we will see few faithless electors this year—certainly not enough to change the results of the election,” Alexander said.

This story was reported from Atlanta and Los Angeles. Kelly Hayes contributed.