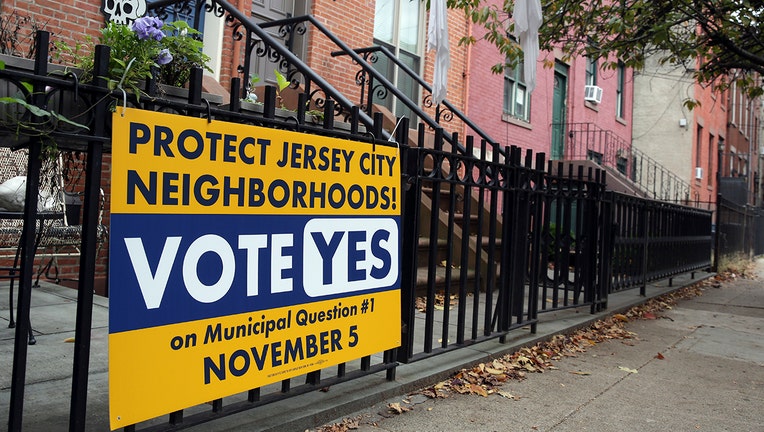 JERSEY CITY, N.J. (AP) - Voters in a New Jersey city that's a train stop away from tourist-packed Manhattan have approved restrictions on Airbnb and other short-term rental companies.

The regulations limit how often landlords can rent properties if they don't live on site.

They also forbid short-term rentals in buildings with more than four units if the owner isn't present and prohibit renters from serving as hosts.

New Jersey voters cast ballots Tuesday to decide how big an advantage Democrats will have in the state's General Assembly in the first legislative contest since Democratic Gov. Phil Murphy took office in 2018.

Polls closed at 8 p.m., with all 80 seats in the Assembly on the ballot.

Along with local races, voters decided a statewide ballot question on whether veterans living in retirement communities should get a $250 property tax deduction.

Democrats now have a 54 to 26 advantage in the Assembly.

One of the top races has been Assembly Minority Leader Jon Bramnick's fight to keep his seat in the 21st District, which is becoming more Democratic.

There's also a single state Senate race on the ballot in southern New Jersey. Voters in the 1st District are electing a permanent successor to U.S. Rep. Jeff Van Drew, who quit when he was elected to Congress. Democrat Bob Andrzejczak, who was appointed to hold the post until the election, is facing off against Republican Mike Testa to fill the remainder of Van Drew's four-year term.

County offices have been accepting mail-in ballots for weeks. State data show roughly 600,000 mail-in ballots have been sent. The last time the Assembly topped the ballot in 2015, about 114,000 or nearly 10% of ballots cast were through the mail.

Murphy, who isn't on the ballot, voted early Tuesday near his home in Red Bank.

Voters pick two assembly members in every district. Democrats and Republicans generally run as pairs on a party ticket. Here is a look at the most competitive Assembly districts:

Incumbent Democrats Bruce Land and Matthew Milam are taking on Republicans Erik Simonsen and Antwan McClellan. Simonsen is the mayor of Lower Township, and McClellan is a councilman in Ocean City.

Democratic incumbents Joann Downey and Eric Houghtaling are trying to fend off Republican challengers Michael Amoroso and Matthew Woolley, who will try to return the Monmouth County district to GOP hands for the first time since 2015.

Assembly Minority Leader Jon Bramnick has been the Republican leader in the Assembly since 2012. He and running mate Nancy Munoz look to be in a close contest against Democratic challengers Lisa Mandelblatt and Stacey Gunderman. The district, including Morris, Somerset and Union counties, has been trending increasingly Democratic. Democrats now outnumber Republicans by about 5,000 registered voters, according to state data from September. In 2015, the last time that just the Assembly was on the ballot, Republicans had an advantage of 3,700 registered voters in the district.

Former Assembly member Anthony Bucco, a Republican, was appointed last month to the state Senate to fill a seat formerly held by his father, who died in September. But the switch happened so late in the election season, Bucco's name remains on the ballot in his old Assembly district. He is on a ticket with fellow Republican Brian Bergen, who is running to succeed retiring Assemblyman Michael Patrick Carroll. They face Democrats Lisa Bhimani and Darcy Draeger. Bhimani is a medical doctor, obstetrician and gynecologist. Draeger worked as a regulator analyst at a financial services firm and now operates a small farm in Chester Township. Bucco has already said he'll remain in the Senate if elected, meaning Republican party officials would chose his Assembly replacement.