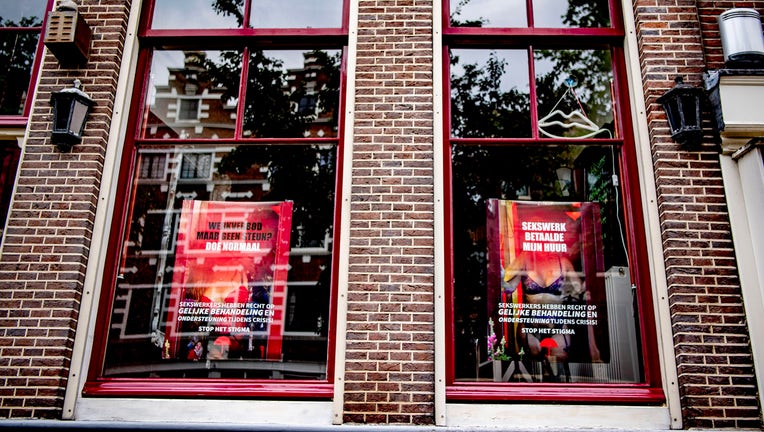 ROTTERDAM, Netherlands - In a scene reminiscent of carefree cafe life before coronavirus lockdown, Peter Bender reached across one of the outdoor tables at De Ooievaar bar and placed a cup of coffee and slice of apple pie in front of one of his guests.

But the coffee went cold and the pie remained uneaten at the bar in Rotterdam's historic Delfshaven neighborhood.

With tough coronavirus measures shutting Dutch cafes and restaurants since mid-October, Bender's guests Tuesday were all white inflatable dummies dressed in T-shirts, wigs and large red noses. They were part of a protest that saw an unknown number of cafes across the country symbolically open their terraces amid growing opposition to the lockdown from hard-hit businesses.

"We’ve waited long enough, we still don’t see any perspective from the government," said Bender. "We have a ludicrous action — today dolls are sitting here, next week it will be real guests. We’re really sick of it."

Elsewhere, stores in one eastern village opened briefly in the morning and a group of sex workers staged a demonstration and set up a peep show outside parliament in the afternoon.

"We also have to pay rent just like any other person who works so why can everybody work except us," said a sex worker from Arnhem who identified herself as Melissa.

The Dutch government has pledged billions of euros in support to ailing businesses.

"I understand their frustration. I think we all understand it very well," he told reporters in The Hague. "But it’s not possible yet. That’s the way it is."

The protests come amid growing lockdown fatigue not only in the Netherlands but across the European Union, where 531,000 people have died in the pandemic and governments are still attempting to rein in new infections while slowly ramping up the pace of vaccinations.

More than 1,000 people gathered in the Hungarian capital, Budapest, on Sunday demanding an end to pandemic restrictions that have left the tourism and hospitality sectors at a standstill for nearly four months. Marches to denounce COVID-19 restrictions also have been taking place in a scattered form across France and other countries.

The frustration also extends to Africa.

The Pubs, Entertainment and Restaurants Association of Kenya joined other federations Tuesday in protesting the country's nearly year-long nighttime curfew saying as many 160,000 Kenyans in the sector had lost their jobs.

The association's Mike Muthamia said bars and restaurants have been on the receiving end of brutal police enforcement of the COVID-19 lockdown while politicians continue to hold large public gatherings where none of the measures are applied.

"This failure to punish the breach of the law while continuing to ruthlessly enforce the same law on another group of people, simply because they are not as powerful or connected as the leaders and elected representatives, amounts to a breach of the human right to earn a living through lawful means," Muthamia said.

The pandemic has taken a brutal economic toll in the Netherlands.

Turnover at the country's accommodation and food services sector shrank by an unprecedented 33.9% in 2020 due to the pandemic and lockdown measures, the national statistics office reported Monday. In the final quarter of the year, as the lockdown was tightened again after a summer of eased measures, cafes saw their turnover decline by 70.4% compared with the previous quarter.

Bar owners insist that they can reopen their terraces safely by enforcing social distancing and hygiene measures. They have been spurred into action in part by recent scenes of large crowds of people packed into city parks enjoying unseasonably warm weather and largely ignoring social distancing measures. Amsterdam authorities have repeatedly restricted access to one of the city's main parks because of overcrowding.

The country’s public health institute announced Tuesday that confirmed infections rose by 7% over the last week, the second straight week the number has risen after weeks of decline.

Sex workers are upset that they have been prevented from working while other "contact professions" such as hairdressers, beauty salons and masseurs have been allowed to reopen from Wednesday in what the government last week called a risky relaxation strategy that came despite infection numbers starting to edge higher recently.

"I can insult people from a distance and I have whips that are longer than scissors for cutting bangs. So I’ll be fine," she said.