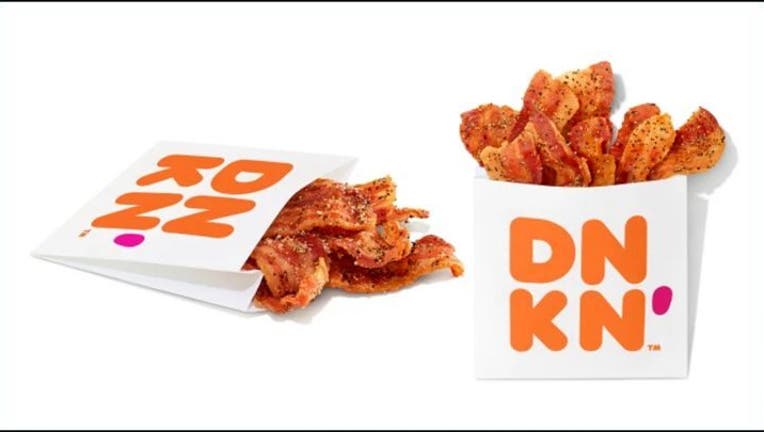 Dunkin’ is adding a salty new snack to its menu: bacon.

Amid the surging plant-based "meats" frenzy, Dunkin’ is going against the grain with its new pork Snackin’ Bacon side item. The $2.79 dish rolled out nationwide this week.

“For anyone who’s seeking a satisfying snack but is stuck with a sad selection at their desk, office kitchen or vending machine, Dunkin’ is adding some extra sizzle to its menu,” the chain said in a press release. “Dunkin’s Snackin’ Bacon is served in a sleeve to make it easy to enjoy while on the go, any time of day.”

Each serving comes with eight half-slices of bacon, glazed with sweet black pepper seasoning and served in a french fry sleeve. Customers can also get the bacon served on the restaurant’s Sweet Black Pepper Bacon Breakfast Sandwich, per the release.

But bacon isn’t the only thing Dunkin’ has added to the menu. The chain also added the Egg White Bowl, Sausage Scramble Bowl and the Lucky Shamrock-themed doughnut and Irish creme-flavored coffee in anticipation of St. Patrick’s Day. And for those who prefer to go meatless, Dunkin’ launched its plant-based Beyond Sausage sandwich late last year.

As the chain continues to roll out new menu items, the stock of parent Dunkin’ Brands Group has been going in the wrong direction. Despite Dunkin’ restaurants generating $9 billion in the fiscal year of 2018, DBG’s stock is down nearly 6 percent year-to-date.