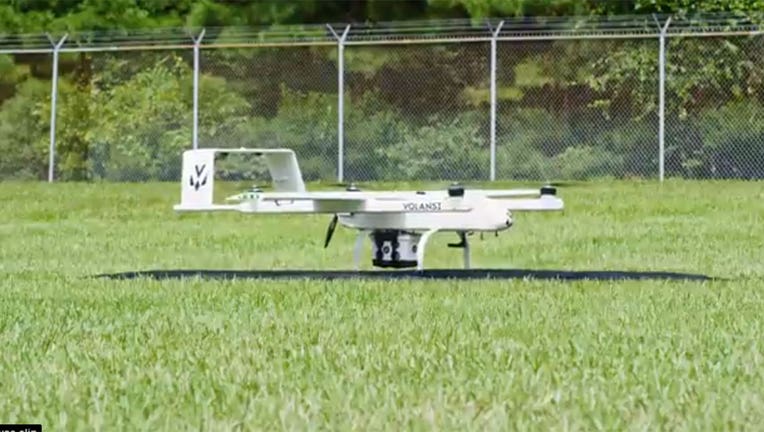 A still image from a video shows a Volansi drone taking off. (Handout photo/Volansi)

NEW YORK - A major drug company has started using drones to deliver medicines from a manufacturing plant to a health clinic in North Carolina.

Drone company Volansi is working with Merck on the project.  The test is the first of three phases to learn about drone technology's role and ability to improve access to healthcare.

The project uses an all-electric drone capable of carrying 10-pounds of cargo up to 50 miles.  The company says it has successfully delivered the first drone delivery of temperature-controlled medicines within the U.S.

The drone releases the package on its own after landing.

"We've seen the world's supply chain strained like never before from the impact of coronavirus," said Hannan Parvizian, CEO and Co-Founder of Volansi said in a statement. "Drone delivery is one solution to getting critical supplies where they are needed, at the moment they are needed most."

Volansi is collaborating with the Federal Aviation Administration's (FAA) Unmanned Aircraft System Integration Pilot Program and the North Carolina Department of Transportation on the project.  It says it plans to seek approval to provide deliveries in additional locations, for phases two and three of the project.