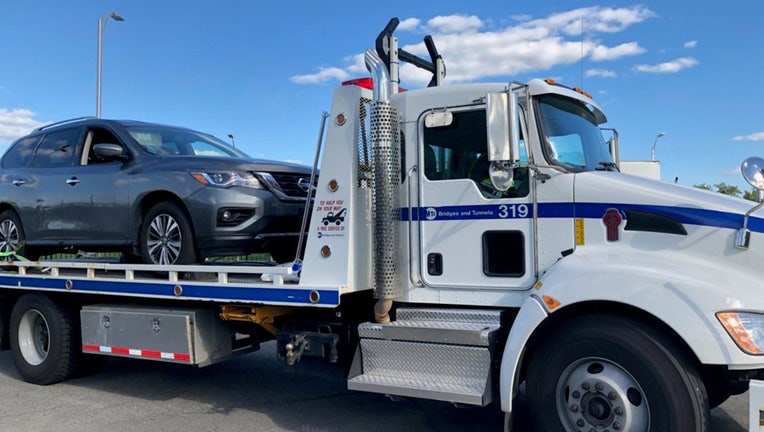 The MTA released an image of the alleged toll cheat's vehicle.

NEW YORK - The agency that runs several bridges and tunnels in the New York City region says it has caught a driver who owes $58,000 in unpaid tolls and fees.  They were considered one of the top toll violators in the area.

The Metropolitan Transportation Authority (MTA) says that Bridge and Tunnel Officers at the Bronx-Whitestone Bridge, which connects Throgs Neck and Queens over the East River, stopped the driver on Friday.

The motorist, whose name was not released, was charged with driving with a suspended registration and has a court date of Oct. 21. The vehicle was impounded.  The MTA released a photo of the Nissan SUV on a tow truck.

Authorities say they had mailed the violator nearly 400 times detailing outstanding tolls and warning them.

"Our law enforcement personnel are trained to look for motorists who have repeatedly failed to pay their tolls, and are equipped with specialized license plate readers that can instantly identify those motorists," said Daniel F. DeCrescenzo Jr., President of MTA Bridges and Tunnels.

The MTA says it has impounded more than 5,000 vehicles from toll cheats and officers had issued more than 31,000 summonses for obstructed or covered license plates since 2017. Motorists can re-register their vehicles after settling their tolls and fees with the agency.

Motorists who tamper with their license plates to make it difficult to read, or place a cover over their plate are also subject to being stopped and given a summons for obstructed or covered license plates, which carries a fine of $138.