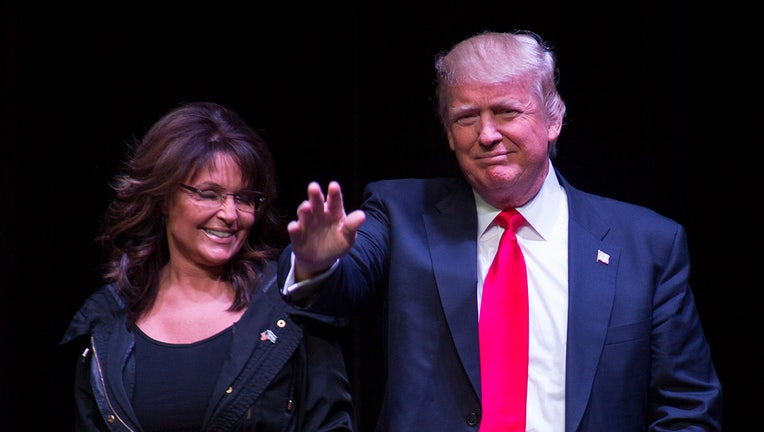 Former Gov. Sarah Palin (R-AK) announces Republican presidential candidate Donald Trump as he speaks at a town hall event on April 2, 2016 in Racine, Wisconsin. Candidates are campaigning in Wisconsin ahead of the Tuesday April 5th primary. (Photo by

ANCHORAGE, Alaska - Former Alaska Republican Gov. Sarah Palin has picked up a prized endorsement in her bid in an extremely crowded field to fill the unexpired term of the late U.S. Rep. Don Young.

"Wonderful patriot Sarah Palin just announced that she is running for Congress, and that means there will be a true America First fighter on the ballot," the statement says.

A total of 51 candidates signed up by the Friday deadline to run in a special primary following Young's death on March 18 at age 88. The top four vote getters will advance to an Aug. 16 special election, in which ranked choice voting will be used. The winner will serve until January, when the current term ends.

Some of candidates who filed for the special primary — including Palin — have also filed to seek a regular two-term House term starting in January.

Candidates had until noon Monday to remove their names from consideration. Three had withdrawn already.

Other candidates with name recognition include Nick Begich, grandson of former Rep. Nick Begich, who died in office and held Alaska’s sole seat in the House before Young was elected in 1973; a North Pole City Council member who legally changed his name to Santa Claus; former lawmakers John Coghill and Andrew Halcro; Anchorage Assembly member Christopher Constant; former U.S. Senate candidate Al Gross; Emil Notti, an Alaska Native leader who narrowly lost to Young in the 1973 election, and Josh Revak and Tara Sweeney, who were co-chairs of Young’s reelection campaign.

This is the third time Trump has issued an endorsement in Alaska races. Earlier he backed Kelly Tshibaka, a former state official, in her bid to unseat U.S. Sen. Lisa Murkowski.

Trump has vowed revenge against Murkowski, a Republican, after she voted to convict him in his impeachment trial and also called on him to resign after the Jan. 6 insurrection at the U.S. Capitol.

Tshibaka has trailed Murkowski in campaign funds. Murkowski ended 2021 with $4.3 million cash on hand, while Tshibaka reported just over $600,000.

Campaign finance reports are due soon for the first quarter of 2022. Tshibaka’s report will cover a Feb. 10 fundraiser hosted with Trump at his Mar-a-Lago club in Florida.

The other endorsement Trump gave was to Alaska Republican Gov. Mike Dunleavy, but that was conditional. Trump said Dunleavy would receive his blessing if Dunleavy didn’t endorse Murkowski, a condition and endorsement Dunleavy accepted.

Palin endorsed Trump early in 2016 before he won the presidency that year.

"Now, it’s my turn," he said, calling her a champion of Alaska values, energy jobs and its people.

Palin in 2008 was selected by then-Sen. John McCain to be his running mate against then-Sen. Barack Obama. Trump said she "lifted the McCain presidential campaign out of the dumps" — even though they were ultimately defeated by Obama.

Trump said he was "proud to give her my complete and total endorsement."

Palin thanked Trump on Twitter, saying she was "honored to have your support."

The June 11 special primary will be conducted primarily by mail, a statewide first, with state election officials citing the tight timeline to hold the event as a major factor. The Aug. 16 special election will coincide with the regular primary.

Voters in 2020 approved a new elections system that ends party primaries and institutes ranked voting for general elections. Those processes will be used for the first time in Alaska this year.

Elections officials are targeting Sept. 2 to certify the winner of the special election.

The regular primary and November general election will determine who represents Alaska in the House for a two-year term starting in January.