Dolly Parton: The life of a leading lady in music and kindness

A quick look at the incredible life of Dolly Parton.

NEW YORK - Country superstar Dolly Parton, who made a big donation to help fund coronavirus vaccine research in 2020, is among this year's Carnegie Medal of Philanthropy recipients.

The award, presented by the international family of Carnegie institutions to honor innovative philanthropists, debuted in 2001 and is normally awarded every two years. It was not issued in 2021 due to the pandemic.

RELATED: Live like Dolly Parton with a stay on her tour bus

The 2022 honorees will receive their medals in a private ceremony in New York on Oct. 13. A priority of the ceremony is fostering personal meetings to encourage the exchange of ideas and spur potential collaboration — something this year’s honorees have already done, said Eric Isaacs, president of the Carnegie Institution for Science and a member of the medal selection committee.

Parton’s $1 million donation to Vanderbilt University Medical Center has received plenty of attention. But her fellow honoree Hill, through her Lyda Hill Philanthropies, was also an early donor to the work that would yield the Moderna COVID-19 vaccine.

"I invested before it was anything," Hill told The Associated Press. "One of the things that Warren Buffett said that stuck with me was, ‘Don’t do what other people can do and will do. Do what other people can’t do and won’t do. And take risks.’ I have had to apply that to my philanthropic investments."

RELATED: SXSW 2022: Dolly Parton dazzled, delighted and somehow got me excited about an NFT 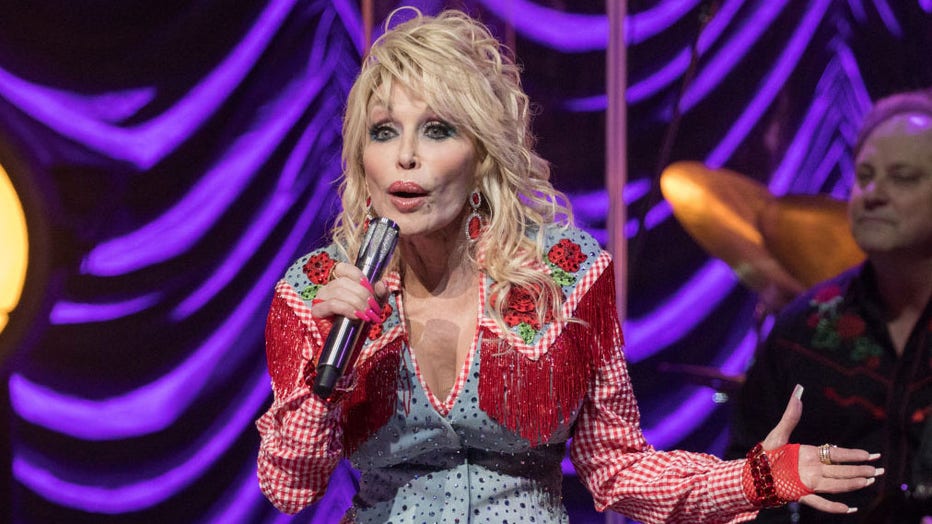 Hill, who focuses her funding on advances in science and nature conservancy, as well as supporting women in those careers, said she never did get a Moderna shot.

Parton, in a statement, said she was honored to receive the Carnegie Medal of Philanthropy.

"I’ve always believed that if you are in a position to help, you should help, and I truly hope that I can be an inspiration for others to lift up those around them," said Parton, who will be inducted into the Rock and Roll Hall of Fame in November, and makes most of her donations through her Dollywood Foundation.

"Whether through my Imagination Library or giving to COVID-19 research, I try to support things that have a special meaning for me. I hope everyone can find something they’re passionate about supporting and do what they can to help make this world a better place."

Considering the intense need created by COVID-19, the pandemic was top of mind while the selection committee was making its decisions, Isaacs said.

"Obviously, this is a very difficult time with the pandemic," he said. "But we think environmental issues are probably equally, if not more, impactful in the sense that pandemics like COVID-19 are likely to become more frequent as the atmosphere heats up. I think we take the long view in terms of our selections."

The Schustermans exemplify philanthropists whose donations have made a long-lasting impact, in addition to making timely grants to address current needs.

The Charles and Lynn Schusterman Family Foundation was established in 1987 to invest in systemic change in the United States and Israel on matters of justice and equity. When Charles died in 2000, Lynn Schusterman took over the foundation, expanding its work and becoming an outspoken advocate for inclusion, especially for the LGBTQ community.

In 2018, their daughter Stacy Schusterman took over the foundation, which changed its name last year to Schusterman Family Philanthropies and now also includes work in reproductive equity, voting rights and criminal justice — all hot-button issues this summer.

"I hope that work like this will inspire other people to give more now," Stacy Schusterman told the AP. "It’s important for people to give a meaningful percentage of their family’s assets. And I think the partnership that can exist between philanthropy and the communities that we’re seeking to help is vital. Government can’t address all problems."

She said she’s thrilled to be carrying on her parents’ work and that she will be celebrated with her mom. "I’m really excited that we’re being honored together," she said. "It’s fun to have it happen as a mother-daughter team."

The Chandaria Foundation had its start as a family enterprise in the 1950s, though the Kenyan-born industrialist of Indian descent had to do some convincing before it began.

When he first brought up the issue, Chandaria remembers his father asking if something was wrong with him and whether he had lived in the United States too long. "We are not the Rockefellers," Chandaria’s father told him. "You better get to work. There’s a big hole over there."

But by 1956, they had established a charitable organization providing scholarships in Kenya and, decades later, its work has expanded into building education and healthcare infrastructure in Africa.

"It’s a basic principle of the Gandhian philosophy: If you have wealth, you are not owners of the wealth," said Chandaria, who also attributes generosity to being a follower of the Indian religion Jainism. "You really should go and help others who cannot help themselves."

Isaacs said the Carnegie Medal of Philanthropy is meant to recognize the work of the honorees in their various fields and locations. This year, the Carnegie institutions will also launch the Carnegie Catalyst award to "celebrate the transformative power of human kindness," which will go to World Central Kitchen, the anti-hunger nonprofit founded by chef Jose Andres.

That award was inspired by the late Vartan Gregorian, the president of the Carnegie Corporation of New York and the co-founder of the Carnegie Medal of Philanthropy, who died in 2021.

"World Central Kitchen is an outstanding model of how humankind can respond in times of dire need by activating the inherent goodness in others — an ideal that was embodied through the life and work of Vartan Gregorian," Thomas H. Kean, chairman of Carnegie Corporation of New York’s board of trustees and former governor of New Jersey, said in a statement.