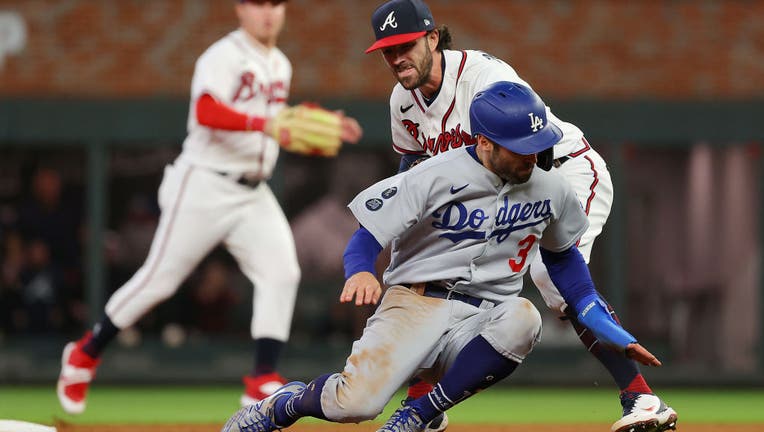 ATLANTA, GEORGIA - OCTOBER 16: Chris Taylor #3 of the Los Angeles Dodgers is tagged out in a rundown by Dansby Swanson #7 of the Atlanta Braves during the ninth inning of Game One of the National League Championship Series at Truist Park on October 1

ATLANTA - Austin Riley homered and drove in the winning run with a single in the bottom of the ninth inning, lifting the Atlanta Braves to a 3-2 win over the Los Angeles Dodgers in Game 1 of the NL Championship Series on Saturday night.

Blake Treinen struck out Freddie Freeman to open the ninth before giving up Ozzie Albies’ bloop single to center field. Albies stole second before Riley followed with his line drive into left field.

Riley spread his arms in celebration as he rounded first base before he was swarmed by his Atlanta teammates. Riley was mobbed as the celebration carried into shallow center field.

The slugging third baseman also homered in the fourth.

The teams are meeting in the NL Championship Series for the second consecutive season. The Dodgers rallied from a 3-1 deficit to win last year’s series in seven games before also winning the World Series.

Game 2 is Sunday night in Atlanta before the series shifts to Los Angeles.

The Dodgers wasted a scoring opportunity in the top of the ninth. Will Smith got two outs before walking Chris Taylor. Pinch-hitter Cody Bellinger hit a soft single to right field, but Taylor got caught in a rundown between second and third that started with right fielder Joc Pederson’s throw to shortstop Dansby Swanson.