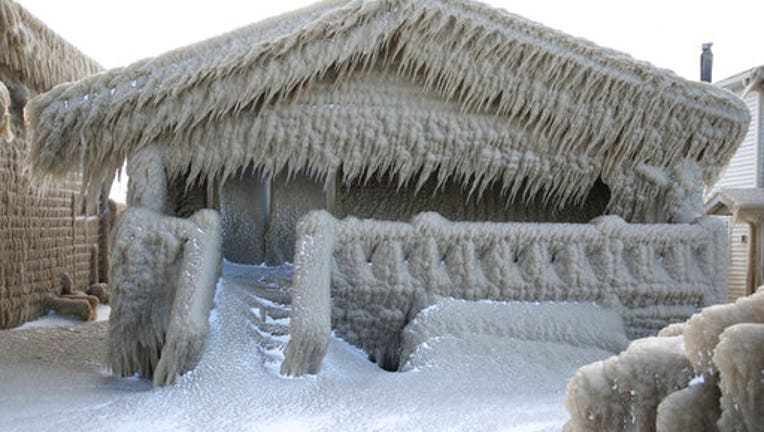 Houses along Hoover Beach is covered by ice from high winds and from the waves from Lake Erie, Saturday, Feb. 29, 2020, in Hamburg N.Y. Blowing snow has fallen around the state since Thursday, though the heaviest snowfall was concentrated in largely

WATERTOWN, N.Y. (AP) — Residents in parts of upstate New York were digging out from 2 feet or more of snow, with additional snowfall in the forecast Saturday.

Blowing snow has fallen around the state since Thursday, though the heaviest snowfall was concentrated in largely rural areas east of Lake Erie and Lake Ontario.

About 2 feet of snow fell around the Tug Hill region in northern New York. South Watertown reported 34 inches and a social media report said 4 feet of snow fell in Carthage, according to the National Weather Service.

"We've got banks that are 5 — over 5 — foot high. You won't see a car coming down through until it's right on you," Duane St. Louis told WNNY-TV as he spent Friday clearing driveways in Copenhagen, N.Y.

Some rural areas south of Buffalo reported 1 to 2 feet of snow with Sardinia recording 26.5 inches, according to the weather service.

Hard-hit areas of northern New York were expected to see less than an inch of more snow Saturday, while parts of western New York could see 1 to 3 inches.