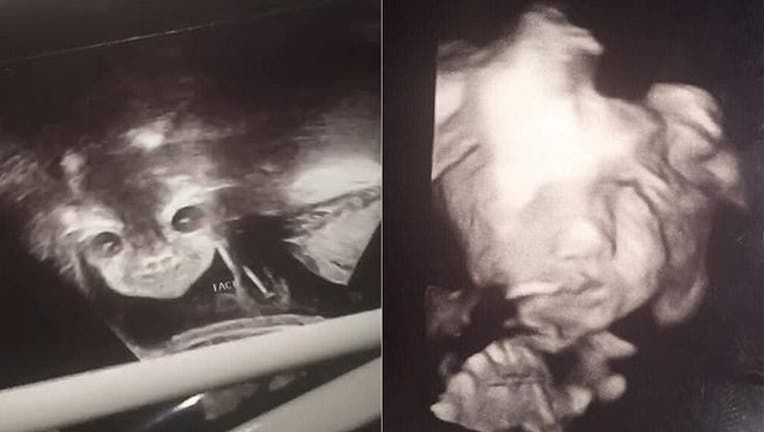 FOX NEWS - A 17-year-old woman in Virginia went into her ultrasound appointment hoping to learn the sex of her unborn baby, but was shocked when the technician caught her daughter seemingly staring back at them like a “demon.”

Iyanna Carrington, of Richmond, shared the amusing photos of her daughter on Facebook, commenting that “most babies hide from the camera.”

“She was looking normal then we found out she was a girl they put it back on her face then her a-- opened her eyes and smiled,” Carrington wrote.

“I love this devil baby so much already,” she wrote to finish the post, which quickly went viral.

As of Thursday, photos of Carrington’s daughter, who she reportedly plans to name Autumn, had been shared over 16,000 times. Carrington reportedly told Kennedy News and Media that the technician assured her and the child’s father, Raleek, that the photo was normal despite the spooky appearance.

“I said ‘she looks like a ghost’ in the doctor’s office and the doctor said, ‘yeah that’s very normal,’” Carrington told Kennedy News and Media. “She looked a bit crazy.”

And with the popularity of Carrington’s post, came the doubters.

“I don’t know why she looked like that,” she said. “Some people from the internet thought she was fake, but that’s my real life baby there. The dad was there too. He was shocked by the news that she was a girl, because he has two sons and he thought it was going to be another boy. We were just laughing at the scan.”

Carrington said she can tell by the other photos that her daughter is “beautiful.”