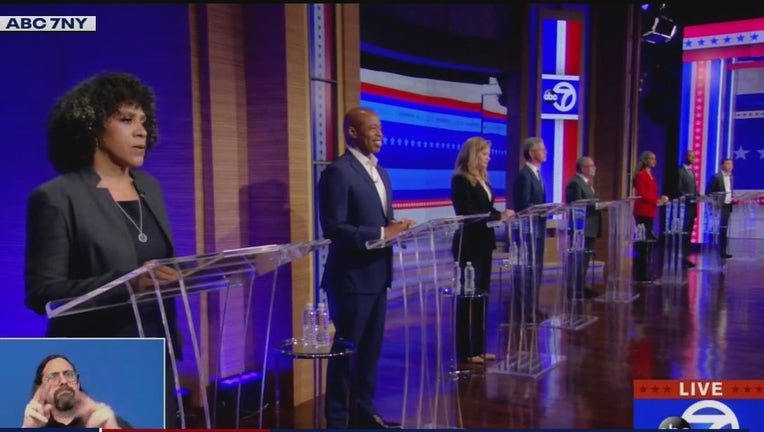 NEW YORK - Crime on the subway was just one of the topics tackled by the Democratic candidates vying to become the next mayor of New York City during their second debate Wednesday night.

And while this was the first one held in person, the candidates came out swinging, as many of the candidates remain divided about whether it's right to defund the police during a time of rising crime in the city.

Civil rights lawyer and activist Maya Wiley vowed to defund the police if she gets elected to City Hall.

"We are going to stop the hiring in the next two police cadet classes as I have said we have a police department that is bloated," Wiley said.

The eight Democratic candidates also shared how they would fight rising crime in New York City during a debate broadcast on ABC7.

"I  want to buy back guns because that is potentially a life saved," Garcia said.

The candidates also outlined how they would bring New York City's economy back.

"As mayor, I'm going to focus on economic revitalization which is not about 50-billion that Wall Street made I'm going to invest in small businesses," said New York City Comptroller Scott Stringer.

"We have to help small businesses back on their feet," Yang said.

Yang was also asked about his lack of experience holding elected office.

"I have the experience a lot of New Yorkers can relate to, I owned and operated a small private company," Yang said.

Stringer was also put on the hot seat. His campaign has been tarnished by sexual harassment accusations from a woman dating back to 20 years ago.

"These allegations are false and there are inconsistencies," Stringer said.

Shaun Donovan, the former housing secretary for President Obama spoke about how he would address the homeless problem.

"We need someone who's actually worked to get mentally ill people housed end chronic homelessness in this city," Donovan said.

Finally, Ray Mcguire said that he believes his corporate business background as an investment banker gives him the experience needed to run City Hall.

"All of my opponents have been in politics for decades. They have failed to fix the problems most important to you," Mcguire said.