The NYC Public Advocate is planning to run for governor of New York pitting him against Gov. Kathy Hochul, Attorney General Letitia James and others.

Williams, a 45-year-old a former New York City councilman who serves as a public ombudsman in his role as the city's public advocate, shared his plans with The Associated Press before formally rolling out his campaign announcement Tuesday.

"I’m usually pushing and tugging at someone who has the levers to get it done," Williams said. "At some point, you have to stop looking to other folks and say, ‘I’m going to do the best I can for the people of the state.’ And for me, that’s running for governor now."

Jumaane Williams announced he is seeking the Democratic nomination for governor, joining a growing field of candidates.

Williams said what he offers in the Democratic primary next year — and Hochul and James don't — is a longstanding record of speaking out against the status quo and Cuomo, even when it was politically inconvenient. He said even before the allegations emerged against Cuomo, Hochul should have spoken out against Cuomo and what he described as a generally toxic culture in Albany.

"We have a vision that runs against just incumbency protection, against status quo and for taking political risks on behalf of the people and presenting a vision, unabashedly about that. And that vision is what we're going to run on and we think we'll be successful," he said. 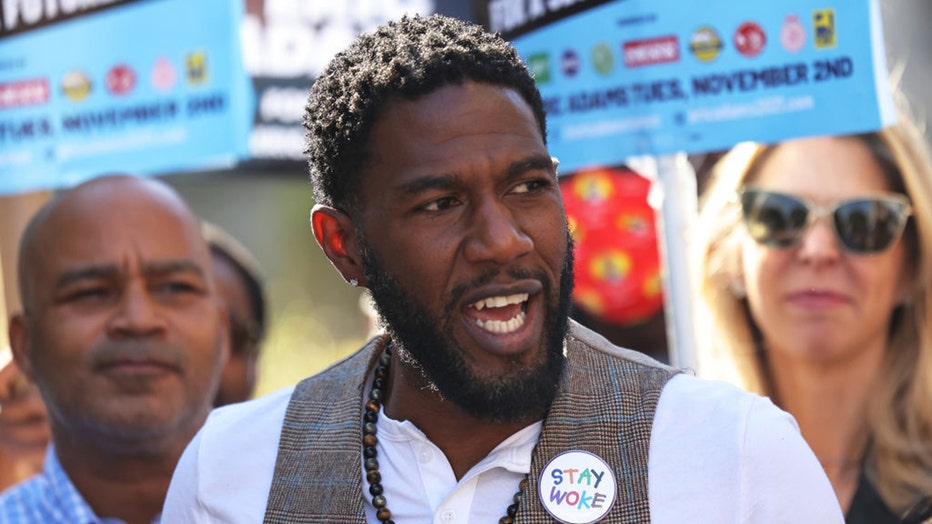 In 2018, Williams unsuccessfully challenged Hochul in the Democratic race for lieutenant governor. While Hochul was Cuomo's running mate and presented a united front with the then-governor, Williams said he would use the largely ceremonial role of lieutenant governor to serve as an independent voice and challenge Cuomo rather than serve as a rubber stamp.

That same year, as Cuomo and Hochul ran as a team, Cuomo was also one of James strongest political allies as she sought the attorney general's office. He endorsed her and headlined a fundraiser on her behalf.

New York City Public Advocate Jumaane Williams has announced that he is running for governor. He spoke to FOX 5 NY's Chris Welch about his platform.

Since the allegations emerged about Cuomo's treatment of women, both Hochul and James have distanced themselves from him and said they believe his accusers.

Letitia James, New York's Attorney General, has officially launched her campaign to be the state's next governor.

When asked if he was implying that Hochul was part of a generally toxic environment at the state Capitol, Williams said, "Clearly, there was a different vision that the lieutenant governor had, but I do again think that we would have been better off if there was a lieutenant governor that was expressly saying what was wrong and speaking out."

Hochul, 63, became the first woman to serve as New York governor after succeeding Cuomo in August. The Buffalo native quickly began running for the office in her own right, making frequent visits to New York City, rich with voters and deep-pocketed donors.

Since the allegations against Cuomo surfaced, Hochul has stressed how her duties as his deputy kept her separate from Cuomo and that she was unaware of his alleged behavior. After the attorney general released a report into the allegations, Hochul said she believed the women. Since she was sworn into the governor’s mansion, she quickly worked to set a different tone from her former running mate, promising transparency and ethics reforms.

James, 63, is the first woman elected as New York’s attorney general and the first Black person to serve in the role. She, like Williams, hails from Brooklyn but has greater name recognition and has proven she can win a statewide campaign.

Hochul or James would be the first woman elected to the governor's mansion in New York. Williams, if he won, would be the second Black man in the office after former Gov. David Paterson.

Williams said he thinks James has been doing "a good job" as attorney general, but thinks his vision has been "really consistent" in comparison to the others in the race.

James' campaign said in a statement Tuesday that the attorney general "is running a change-making campaign for governor" and has seen "a groundswell of support from New Yorkers, labor unions, elected officials and others around her historic candidacy for governor."

"Throughout his career, Public Advocate Jumaane Williams has been an important leader on issues from police reform to housing and we welcome him to the race," the statement said.

The son of Grenadian immigrants, Williams has served as public advocate since 2019, giving him the power to investigate citizen complaints, sponsor legislation and use the bully pulpit of his office to push for change.

In that 2018 Democratic race for lieutenant governor, Hochul defeated Williams by 7 percentage points. He won more votes than Hochul in Manhattan, Brooklyn and two counties elsewhere in the state but Hochul swept every other county.

A Giuliani joins race for governor

Giuliani — Andrew, not Rudy — has announced that he is running for governor of New York. Giuliani, 35, is the son of the former mayor.

This time around, Williams said he thinks he'll be successful because he's more well-known as someone who holds a citywide elected office, and said he aims to build a more robust campaign team and fundraise more than he did in his insurgent 2018 bid.

Williams is the most unabashedly progressive candidate to jump into the race. He's often seen wearing a "Stay Woke" button on his lapel and has developed a reputation as a progressive who has been arrested several times for civil disobedience at demonstrations for liberal causes, especially on matters of immigration and police misconduct.

He said he will seek and accept the endorsement of the liberal Working Families Party. James was once aligned with the party but later distanced herself.

Williams has been criticized in past political campaigns, including his 2018 race against Hochul, for his 2013 comments saying he was personally opposed to abortion. Williams later said he supported a woman’s right to access an abortion, saying, "that’s what choice is about."

"You can have whatever belief you want but government has to make sure that women have the right to safe, legal, affordable abortions and those are under attack right now," he told the AP.

In a campaign video he posted online Tuesday to kick off his campaign, Williams addresses his diagnosis at a young age of Tourette syndrome, a neurological disorder characterized by involuntary, repetitive movements and vocalizations.

Williams, speaking in a voiceover, said the diagnosis never defined him.

"But it has represented a truth about my life and my work," he said. "I'm always moving."

The Long Island congressman says that he raised more than a million dollars during the first day of his campaign to replace Gov. Andrew Cuomo.