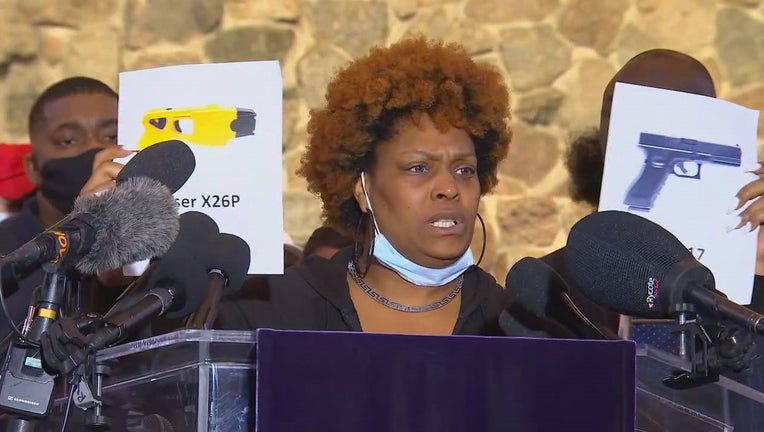 Naisha Wright, the aunt of Daunte Wright who was fatally shot by police, holds up images of a Taser and a handgun at a press conference.

MINNEAPOLIS (FOX 9) - Members of Daunte Wright's family stood alongside their attorney Thursday afternoon calling for accountability and the conviction of the former officer charged in Wright's death.

Ex-Brooklyn Center police officer Kimberly Potter is charged with second-degree manslaughter after she fatally shooting Wright at a traffic stop on Sunday afternoon. Body camera video shows she shouted, "Taser, Taser, Taser," and fired her handgun instead of her Taser. Wright died at the scene.

Members of Daunte Wright's family stood alongside their attorney Thursday afternoon calling for accountability and the conviction of the former officer charged in Wright's death.

"See a gun, a Taser–a Glock 17 and a Taser," said civil rights attorney Ben Crump while holding corresponding photos. "So it’s very difficult to accept this is an accident when you have veteran who has been on the police force for 26 years."

Crump expressed frustration, comparing the manslaughter charge to former Minneapolis police officer Mohamed Noor who was convicted with third-degree murder in the fatal shooting of Justine Damond. Charges in Potter's case can be amended by the state.

"All this family is striving for is to get full accountability to get equal justice," said Crump. "Nothing more or nothing less."

While Potter has been charged, the Wright family says nothing will bring back their loved one.

Crump said following the press conference, the Wright family would be going to the funeral home to make arrangements for Daunte. Crump confirmed the funeral would be held next Thursday at noon at New Salem Missionary Baptist Church in Minneapolis.

Wednesday, Rev. Al Sharpton announced his organization, the National Action Network, will cover Wright's funeral costs. Sharpton will also give a eulogy at the upcoming service.