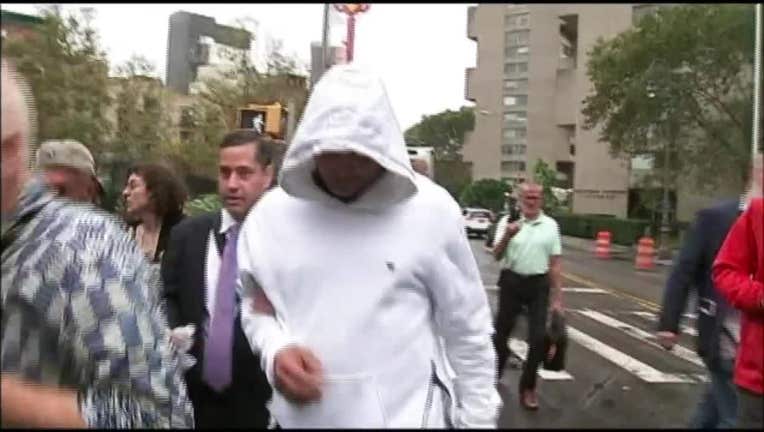 NEW YORK - The successful revival of sports radio personality Craig Carton's career just months after being released from prison has not gone unnoticed by at least one victim of his multimillion-dollar fraud.

An attorney for Dukal Corp. and its owner, Gerard LoDuka, has asked Carton's sentencing judge that a restitution order be rewritten to reflect "what is almost surely an extremely lucrative job."

The letter, dated Friday and entered into the court record on Monday, noted that Carton returned to the airwaves in November in a prime afternoon slot on WFAN that has "achieved dramatic ratings success" and he was reportedly being considered as a daily morning host on an MLB Network show.

Yet, the letter signed by attorney John G. Martin maintained, Carton, 52, has not made a single restitution payment since his June release from prison after serving about a year of a 3 1/2 year sentence that was reduced after he participated in prison rehabilitation programs.

The letter said an order requiring Carton to pay 15% of earnings toward nearly $5 million in restitution should be changed to reflect his career revival. Priority, it said, should be given to pay LoDuka and another person before a company with over $25 billion in assets that also lost money.

It also noted that he cited over $7 million in debts and a video job in lower Manhattan that paid only about $50,000 annually when he applied for bankruptcy last summer in New Jersey.

Carton's lawyer, Derrelle Janey, said the letter's restitution claims were wrong. Carton has not only made payments toward restitution since his release, but he made payments before he was imprisoned even before they were required, the lawyer said.

"Most criminal defendants don’t have the opportunity to return to a place where they’re back at the starting line," Janey said. "Mr. Carton is fortunate, by the grace of God, that he is at a position where he can return to the starting line."

Still, the lawyer added, Carton makes "a fraction of what he previously made."

Craig Carton, the co-host of the popular sports radio talk show Boomer and Carton was arrested by the FBI on federal charges.

Carton reportedly made about $2 million when he was paired with ex-NFL quarterback Boomer Esiason on a popular WFAN "Boomer and Carton" radio show before his 2017 arrest forced him out.

At his 2019 sentencing, Carton said memories of sexual abuse he suffered at age 11 were triggered by revelations about sex crimes by Jerry Sandusky, a former assistant Penn State football coach who was convicted of child sexual abuse in 2012.

He said he turned to blackjack and became a gambling addict, oblivious to winning and losing.

He credited his arrest as a "lightning bolt of awareness" that led him to Gamblers Anonymous and therapy.

Now, Janey said, Carton concentrates on his four children and his job.

"It sounds glamorous but it’s a very difficult job. It’s difficult to get it right and all eyes are on him, and the moment he gets it wrong, it’s over," Janey said.