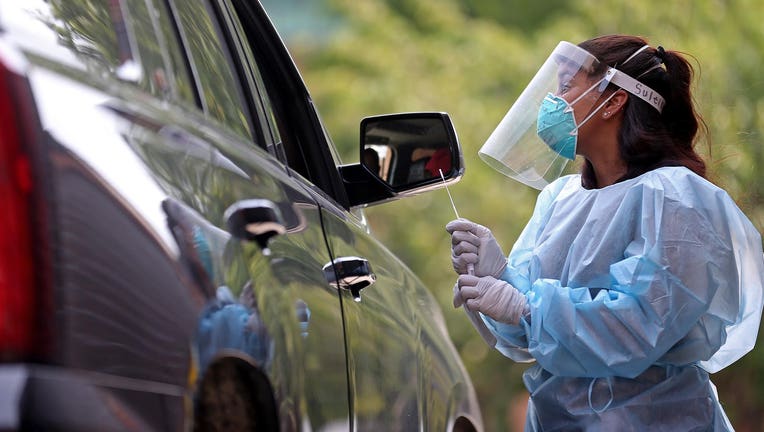 A medical worker takes a swab sample from from a patient at a COVID-19 testing site at the Bunker Hill Housing Development on Aug. 11, 2020 in Charlestown, Massachusetts. (Staff Photo By Matt Stone/ MediaNews Group/Boston Herald)

A variety of issues are motivating voters across the country, according to a series of focus groups by FOX TV Stations. But the ongoing coronavirus pandemic appears to be a top issue for many people who will head to the polls this fall.

Focus groups held in areas across the country — Atlanta, Chicago, Los Angeles and Washington, D.C. — offered insight when participants answered the question, “What is the most important issue for you this election season?”

In Chicago, one voter is seeking a leader who will prioritize “character and decency,” while another in Atlanta said they are focused on issues related to “human trafficking and the military.”

A voter in Los Angeles said homelessness is the most important issue and will play a role in who they choose to vote for in the polls. Social justice was the priority for one D.C. voter.

But the response to COVID-19 and how the country will handle the pandemic came up multiple times.

The biggest issues for Atlanta voters this election

A group of voters in Atlanta shared what issues are most important to them in 2020.

Ecleynne Mercy, an attorney who teaches law school graduates how to prepare for the bar exam, shared several subjects she most cares about, from the COVID-19 outbreak, to economic and medical inequality, to a president who will put further pressure on officials in Louisville to “arrest the cops that shot Breonna Taylor.”

Taylor, a Black 26-year-old emergency medical technician, was shot multiple times when Louisville officers burst into her apartment with a warrant during a drug investigation. No drugs were found.

For Carmen Coya, a PR specialist and small business owner, issues related to finance, schools and immigration were the most important.

Ashley Quagliaroli is a paralegal who is active with Georgia’s Republican party as a campaigner and volunteer.

“I think that human trafficking is something that is personally very important to me. I also think that public safety is going to be very important, and getting the economy back on track,” Quagliaroli said.

For others, it’s having leadership in the White House for several areas.

The biggest issues for Chicago voters this election

A group of voters across Chicago shared what issue matters most to them ahead of the 2020 election.

In Chicago, voters in the focus group were focused on a leader that would prioritize “character and decency.”

“I really think it goes back to this idea of decency. You know, Joe Biden has said repeatedly that character is on the ballot. And I think that for everyone’s sake and our well-being, we need to choose a leader that is going to put character and decency first. Because it’s only through that that they can kind of relate to and have empathy with the broader population, and thus kind of design solutions and policies that will reflect us all,” said Marvin Harris, a student at Northwestern University.

“Donald Trump ran on the platform in 2016 of ‘Hey, I’m a newcomer. I’m new to this idea of politics.’ But it’s been clear that we actually need an experienced politician who is willing to take personal responsibility and be a true leader instead of pointing blame,” Matros said.

Activist Eva Lewis said the issue of voter suppression registers high for her this election season.

“I think that a lot of people will vote for Biden, and want to vote for Biden just because of the trends that Trump has kind of showed us,” Lewis said. “But USPS mailboxes are being taken up. The USPS is being attacked. How are we going to vote in the fall? I think that’s the biggest question, and I think that we need to give more attention to that."

The biggest issues for Los Angeles voters this election

Homelessness, COVID-19 and police reform were among some of the top issues for this diverse group of voters in Los Angeles.

On the West Coast, homelessness was a topic that came up repeatedly. For chef and author Dean Sheremet, that’s the biggest issue.

“It’s on the street. It’s in front of everyone right now. Obviously COVID-19 is huge, but I think that those two things go hand-in-hand, and that’s a really huge thing that needs to be addressed,” Sheremet said.

For Jeanne Harrison, housing affordability was the biggest issue for her.

“It goes hand-in-hand with homelessness, with COVID and people losing their jobs. I think we’re going to see a whole lot more of homelessness in Los Angeles. It’s really a shame and very sad,” Harrison said.

An undecided voter and student at UCLA, Miriam Gorbatov, said homelessness and the need for a “comprehensive approach of mental health, drug rehab, affordable housing and prison reform.”

For others in Southern California, it’s racial equality and someone that will champion those issues in the White House.

“To affirm and indicate, not just with words, that Black lives actually do matter here in Los Angeles,” said Dr. Ashley Wiley Johnson. “And that’s through homelessness, through mental health, and behavioral health treatment. And just in our every day interactions. It’s about time that a change has come.”

Marcellas Reynolds, a fashion stylist and television host, said police reform is the top issue for him this November.

“I mean that is why we’re out in the streets. That’s why we’re protesting. And we’ve seen it really, the protests going really horribly here in LA. And I think we have to come up with a comprehensive plan to really address that,” Reynolds said. “I think that actually kind of piggybacks on what everybody else said. The homeless issue. This issue of us just like, feeling hopeless. That’s what’s leading to the protests in the streets.”

Washington, D.C.-area voters discuss their thoughts following the 2020 Democratic National Convention and the most important issues for them in November.

Patricia Howard-Chittams, a commissioner on the local Advisory Neighborhood Commission, said the priority for her this November is crime.

“Crime and justice and protection for the citizenry,” she said.

For Jim Wass, chairman of Prince George's County Republican Party, he said the destruction of American cities amid the COVID-19 pandemic and protests against racial inequality was a “carefully avoided” topic during the recent Democratic National Convention. “It wasn’t just missed,” he added.

Rachel Picon, a recent George Mason University graduate, said “racial inequality, social justice and vulnerable populations” are all the most important issues for her in 2020.

“All those people that need to be protected in my county. That’s where it’s at for me,” Picon said.