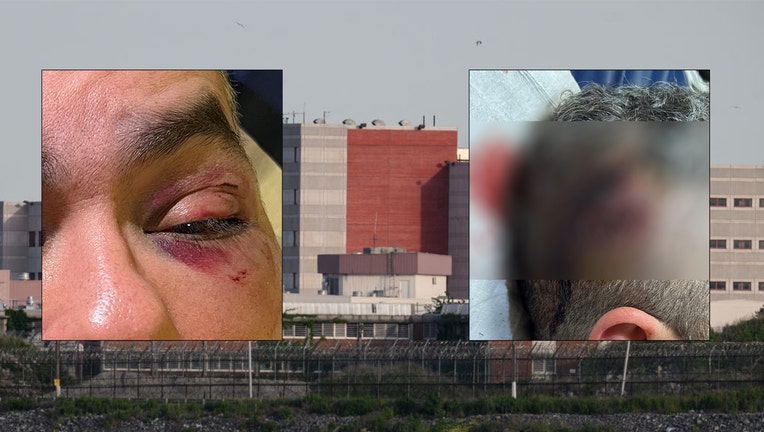 The Correction Officer's union in New York City says it is outraged after a officer was violently assaulted by an inmate on Rikers Island.

NEW YORK - The union representing Correction Officers in New York City is expressing its outrage after an officer was reportedly assaulted by a person in custody on Rikers Island.

According to a DoC spokesperson, at around 12:50 p.m. on Wednesday, the unidentified officer was working at the Robert N. Davoren Center when he was assaulted by an inmate.

In photos released by the Correction Officers' Benevolent Association, the injured officer can be seen with a black eye and several lacerations on his head that required stitches.

"This heinous, unprovoked attack on our officer who was simply doing his job comes at a time when over 1,200 officers have been assaulted and the Public Advocate and the City Council’s solution is to prohibit us from separating violent offenders from the general population," said COBA President Benny Boscio. "If their legislation passes, one of our officers may get killed and they will have blood on their hands. We are not this city’s sacrificial lambs!"

The officer was taken to a hospital for treatment.

"This incident was an abhorrent, unprovoked assault on a Correction Officer who was doing his job and carrying out his duty. We are pursuing re-arrest of the person in custody responsible. Assaulting a staff member in a jail is as much a crime as it is out in the community, and attacks on our staff will never be tolerated," the Department of Correction said in a statement.

Protesters rallied in Manhattan on Thursday to demand that the federal government take over the jail complex and demanding Mayor Eric Adams to shut it down permanently.

Dozens of people rallied in Lower Manhattan on Thursday to demand the closure of Rikers Island. So far, 18 people have died in the facility in 2022.