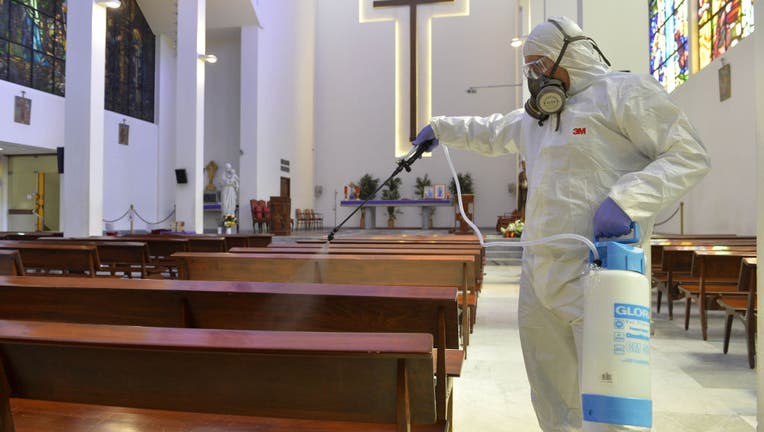 A health official wearing a protective suit sprays disinfectant at a church as a precaution against the novel coronavirus in Beirut, Lebanon on March 5, 2020. (Photo by Hussam Chbaro/Anadolu Agency via Getty Images)

NEW YORK - A rising number of churches across the United States are making changes in response to the coronavirus outbreak, including a decision by numerous Catholic dioceses to suspend the serving of wine during Communion.

From how it spreads to where it originated, here's a look at everything you need to know about the contagion.

Thus far, there’s been no indication of any widespread cancellations of worship services. However, Jamie Aten, a psychologist who is executive director of the Humanitarian Disaster Institute at Wheaton College, said it would be wise for faith leaders to start preparing for that eventuality.

“Some faith communities already stream services or communicate with each other over social media,” Aten noted. “Though there aren’t any perfect solutions and such discussions can be difficult to have, it’s better to have them now and not later.”

Among the Catholic bishops ordering changes was Archbishop Paul Etienne of Seattle, whose region is the worst hit in the U.S. The Washington state health department has confirmed more than 30 cases of the coronavirus in the Seattle area, and at least 10 deaths.

In a letter to parish leaders, Etienne said wine should not be distributed during Communion until further notice, and church-goers should receive the Communion wafer in their hand, not on their tongue.

The archbishop urged Catholics to stay home from Mass if they are sick; to practice good hygiene, including frequent hand washing; and to avoid hand-to-hand contact during moments in the church service when churchgoers traditionally shake hands with those near them in the pews.

Many other dioceses around the U.S. are taking similar steps - even in areas such as Pittsburgh where no cases of coronavirus have been confirmed. Among the many dioceses and archdioceses making the changes were those in Atlanta, Boston, Joliet, Illinois, San Antonio and Newark and Paterson, New Jersey.

In Chicago, the Catholic archdiocese not only suspended the serving of Communion wine from a chalice, it also ordered priests, deacons and other personnel to wash their hands before Mass and use an alcohol based anti-bacterial solution before and after distributing Communion.

“Assure the faithful that if they are sick or are experiencing symptoms of sickness, they are not obliged to attend Mass, and even that out of charity they ought not to attend,” the archdiocese told its priests.

Archbishop John Wester of Santa Fe, New Mexico, was among the bishops ordering that the Communion wafer be placed in the recipient’s hand, not on the tongue, for the time being.

“How we receive, while very personal to the individual communicant, is not crucial,” Wester wrote on the diocese website. “Receiving Communion in the hand is every bit as respectful as receiving on the tongue.”

The U.S. Conference of Catholic Bishops has shared with its member bishops some suggested steps that could be taken in response to the outbreak, but it has left it up to individual bishops to decide if and how to implement those steps. Some dioceses said they would leave some decisions to the discretion of their parish priests.

The virus outbreak was prompting changes in many other faiths as well — in the U.S. and around the world.

RELATED: How to avoid getting sick on a plane — and in general — as coronavirus, flu and common cold spread

Saudi Arabia on Wednesday banned its citizens and other residents of the kingdom from performing the pilgrimage in Mecca, while Iran canceled Friday prayers in major cities.

Several imams in the U.S. advised Muslim worshippers that it is religiously permissible to pray at home rather than attend Friday group prayers, which are generally considered obligatory for adult men.

After the prayers, Muslim congregants typically greet one another with hugs, handshakes and cheek kisses. Now, some mosque leaders are halting the custom of shaking the imam’s hand after prayer and are advising worshippers to find alternative greetings.

“For the time being, it may be worth avoiding touch and switching to a hand on the heart, a respectful nod, and a warm smile,” Omar Ricci, spokesman of the Islamic Center of Southern California, wrote in an email to congregants.

Concerns about the virus have prompted two leading pastors of Life.Church, which claims tens of thousands of followers at locations in 10 states, to voluntarily place themselves in quarantine at their homes in the Oklahoma City area.

In a video for the church community, Pastor Craig Groeschel said he and Bobby Gruenewald took the precautionary step after learning that one of their fellow participants at a conference in Germany had tested positive for the virus.

Groeschel said he and Gruenewald had no symptoms, and added, “The good news is, I have lots of time to pray.”

“Consider putting smaller bottles of hand sanitizer in each pew,” she wrote. ”As you greet one another or exchange greetings during the sharing of peace, consider a simple head bow, a wave, or a fist bump."

In the event the outbreak worsens, Hiller said churches should ensure that a communication system is in place that could spread the word if services are canceled or church-run schools are shut down. In the event of school closures, she said plans should be in place to offer online classes.

“If you are going to use e-learning, develop procedures and practice it before you launch into it,” Hiller wrote. “Communicate with your families – often.”

The actions in the U.S., and elsewhere, mirror some of those taken in Asia by churches who were the first to grapple with the effects of the coronavirus outbreak. In Hong Kong, the Catholic Church suspended public Masses two weeks and urged churchgoers to watch them online. A Protestant church in Seoul shut its doors and switched entirely to online worship services.

Not everyone is taking drastic steps.

At the Church of the Redeemer, an Anglican congregation in Nashville, Tennessee, pastor Thomas McKenzie advised churchgoers that he planned to continue offering wine during Communion, with the chalice being carefully wiped by a cloth between each use.

“Scientists have shown that the risk of transmitting disease in this way is very low,” McKenzie wrote.

He also indicated his church would continue to hold services even if the outbreak worsened.

“Please know that we will worship on Sunday morning no matter what,” he wrote. “Some other church events might be canceled -- as we sometimes do in bad weather -- at the request of local authorities. However, we Anglicans have long continued to worship even in the face of bombs, persecutions, earthquakes, fires, floods and, yes, disease.”