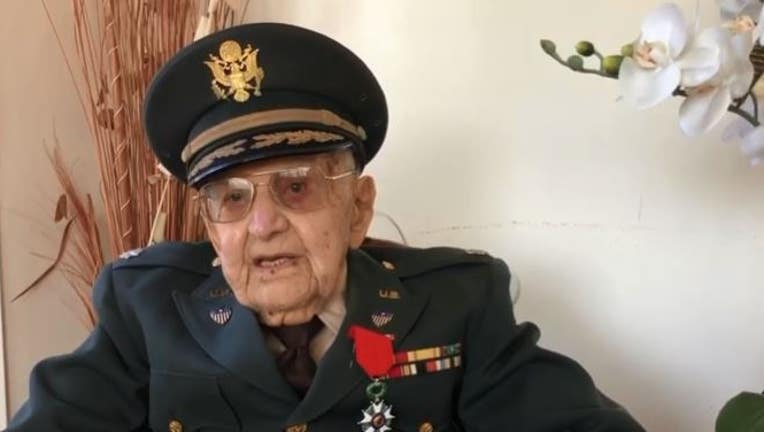 LAKEWOOD, Calif - The mayor of Lakewood is calling on the public to send birthday cards to a World War II veteran whose planned 105th birthday celebration later this month has been thwarted by the coronavirus pandemic.

Sam Sachs' senior living home in Lakewood was "planning a fancy 105th birthday celebration for him, but the party now has to be re-imagined because of the coronavirus and the dangers of bringing people together for a gathering,'' Mayor Todd Rogers said in a video message. "Because of this, I'd
like to ask that we all consider helping with this redesigned 105th birthday party for Sam by writing him a birthday card.''

The mayor noted that the cards will be set aside for several days once they are received and then opened with gloves "to be extra careful for Sam,'' who will turn 105 on April 26.

In a video posted on YouTube -- titled Sam Sachs 105 BDAY Wish -- in which the centenarian is dressed in a military uniform, he noted that a birthday party was in the works "but the virus took charge.''

"Now that this has been canceled, I am sending this out to all of you ... to send me a birthday card to take (the) place of the event that should have happened at the birthday party,'' said Sachs, a onetime U.S. Army paratrooper who went on to become a teacher after completing his military service.

"Now I am wondering how many birthday cards I will get,'' he said.

"I hope I get many of them and I'm also asking our president to send me a card also -- what a thrill that would be.''

Ivonne Meader, who owns the senior living home where Sachs lives, said she had planned a "very big party'' that would have included Sachs' family members traveling to the Southland from out of state.

She said the pandemic forced her to change course and launch the birthday card drive that had garnered about 50 to 60 cards from people in California, Nevada, Oregon New York, South Carolina and Florida as of Friday afternoon.

Hopes are high for Sachs to get cards from throughout the world, including homemade ones from children, she said.

A surprise "car parade'' in front of the house is also in the works for Sachs' birthday, said Meader, who described the military veteran as "the oldest client I've ever had'' and "very, very sharp.''