Cop and teen shot in struggle

A police officer and a teenager were wounded during a struggle. The police commissioner said the teen was armed with an illegal handgun.

NEW YORK - An NYPD officer was out of the hospital Wednesday after he was shot during a struggle with a teen the night before in the Belmont section of the Bronx. The 16-year-old remained hospitalized.

The four-year veteran of the force approached a disorderly group near Lorillard Place and East 187th Street at around 9:30 p.m. when a struggle with the armed teen ensued after he was told to remove his hands from his pockets, said NYPD Commissioner Keechant Sewell during a briefing.

The officer was struck in the leg and taken to St. Barnabas Hospital. He was released early Wednesday morning.

"After several attempts to have the individual comply, he began to physically struggle with the officers. At this point there was a single round fired from the suspect's firearm that struck the suspect in his left groin area and exited the suspect and struck the officer in the right leg," added Sewell.

Cop shot during struggle with teen

An NYPD officer is out of the hospital after he was shot in the leg during a struggle with a 16-year-old in the Belmont section of the Bronx. The teen was hit in the groin. The officer did not fire his weapon, said police.

The suspect, a known gang member who was on probation following a gun arrest in 2020, was taken to a hospital to be treated for a non-life-threatening injury.

No officer fired a weapon, said police. The gun, which was recovered at the scene, was stolen from South Carolina.

"What is it going to take for we finally realize that we are endangering the lives of children by allowing children to carry guns that they are using on children," said Mayor Eric Adams during the briefing. 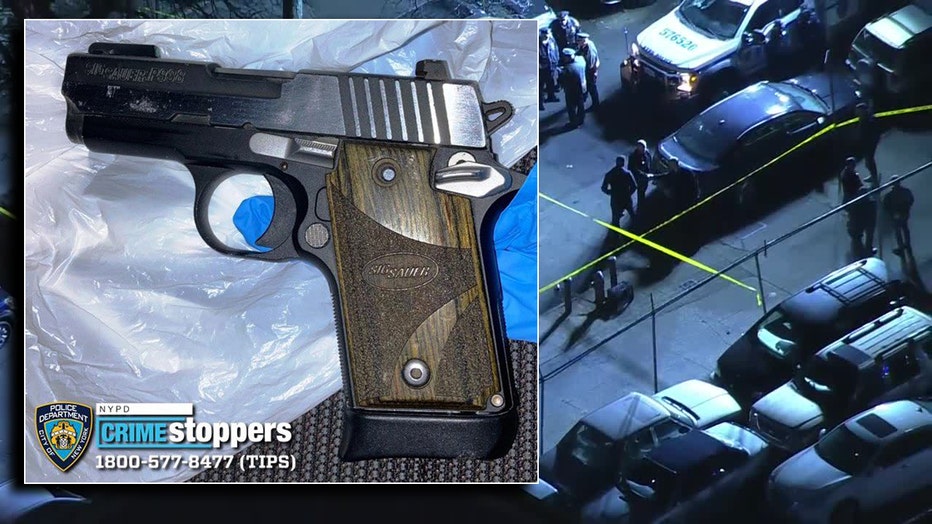 SkyFOX: Cop shot in the Bronx

A New York City police officer and a suspect were shot and wounded in the Bronx on Tuesday night, officials said.