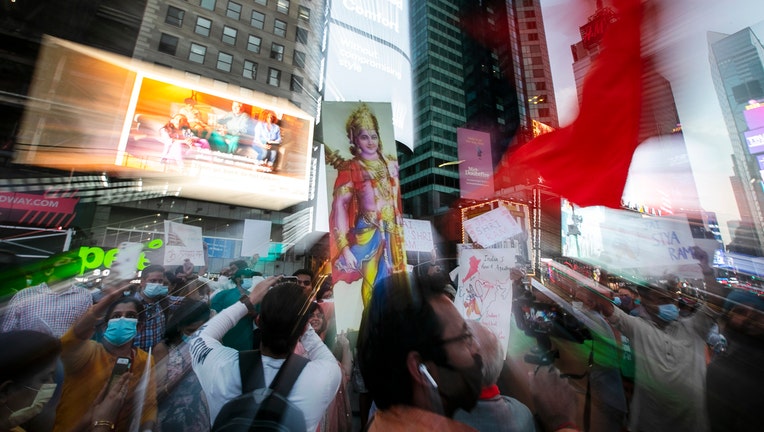 People gather in Times Square on Wednesday, Aug. 5, 2020, in New York after the groundbreaking ceremony of a temple being built on disputed ground in India. (AP photo/Frank Franklin II)

NEW YORK (AP) - A Midtown Manhattan celebration of a Hindu temple being built on disputed ground in India brought polarized groups into Times Square, where supporters of the landmark project were flanked by protesters calling it an offense to Muslims.

Protesters organized under the name the Coalition to Stop Genocide in India held signs on the edges of the celebration reading, "BJP is Islamophobia," referring to Indian Prime Minister Narendra Modi's ruling party.

Modi participated in the groundbreaking for the Hindu temple, which will be built where the Babri Masjid mosque stood, on Wednesday in the northeastern Indian city of Ayodhya. The mosque was destroyed by Hindu hard-liners in 1992, sparking communal violence that left some 2,000 people dead.

Hindus believe the deity Ram was born at the site and say the Mughal Emperor Babur built a mosque on top of a temple there.

The organizers of the temple celebration in Times Square paid for billboards showing the planned Ayodhya temple, images the deity Ram and the Indian flag.

A coalition of advocacy organizations — including Muslim, human rights, anti-fascist and secular groups — asked advertisers not to show the images of the planned temple and called on New York City Mayor Bill de Blasio to intervene.

The Mayor's Community Affairs Unit was in touch with the authors of the letter, the mayor's press office said in an email sent in response to questions.

"Both groups were free to exercise their first amendment rights, and did so peacefully," on Wednesday night, the mayor's press office said.