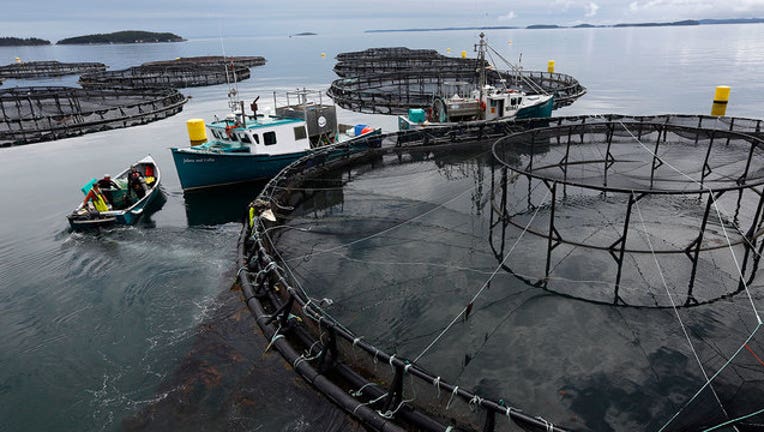 ST. ANDREWS, N.B. - The Atlantic Salmon Federation is raising concerns about the escape of farmed salmon off the New Brunswick coast in the Bay of Fundy.

Spokesman Neville Crabbe says about 1,000 salmon escaped from a Cooke Aquaculture site near Deer Island on Aug. 20 and began showing up in the Magaguadavic River the next day.

Joel Richardson, vice-president public relations for Cooke, said a hose was being used to collect fish from a cage when the hose broke.

He said the company initially thought 2,500 fish escaped, but many were collected from the deck of the ship and the number was adjusted to 1,000.

He said the broken hose was replaced immediately and a video monitoring system was repositioned to target the area.

Crabbe said 53 aquaculture escapees have been collected so far, and he expects more of the fish have rivers other than the Magaguadavic.

"Of the 20 known wild Atlantic salmon rivers in the outer Bay of Fundy, this is the only one that is continuously monitored for escapes," Crabbe said Wednesday.

He said the concern is that the farmed fish can spread disease and spawn with wild salmon — creating offspring that are less able to survive in the wild.

"These are Atlantic salmon, although they have been domesticated over many generations and have been selected for traits that are not advantageous in the wild," he said. "So when you have spawning that's occurring between aquaculture escapees and wild fish, you are wiping away potentially 10,000 years of evolution in a single spawning event."

He said while aquaculture companies have made improvements in their equipment to reduce the number of escapes, accidents and weather events like last week's post-tropical storm will happen.

"Those structures can only withstand so much, so there can be equipment failures," Crabbe said.

He said there needs to be greater transparency when there are escapes, and aquaculture companies need to take responsibility for the escaped fish.

He said efforts by the New Brunswick government to modernize the Aquaculture Act are a step in the right direction.