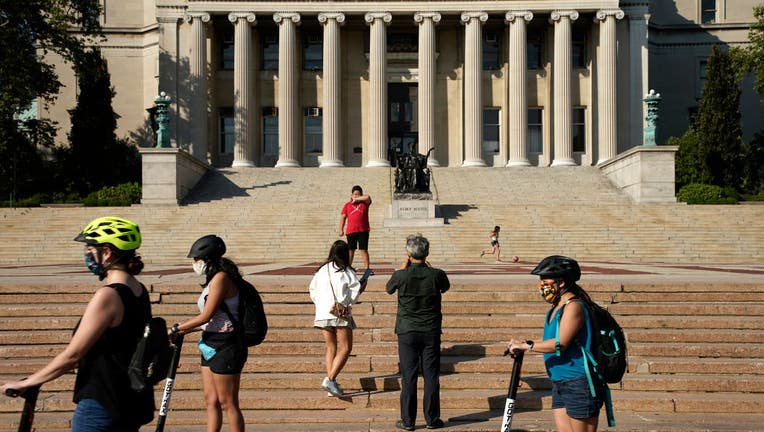 NEW YORK (AP) - Columbia University is taking the name of its medical school’s founder off of a campus dormitory because he owned slaves and once advertised a reward for the return of one who ran away, the university’s president said Friday.

Columbia President Lee Bollinger told students and faculty in a letter that the university was not erasing Samuel Bard’s contributions to the school but that it became clear amid a global reckoning on racism and racist legacies that having a dorm named for him was not appropriate.

The building, which is home to clinical students studying at Columbia University Irving Medical Center, was named for Bard when it opened in 1931. Bollinger said it will be rechristened “with a name that represents our University’s values."

Last month, Columbia's Teachers College announced it was removing psychologist Edward Thorndike’s name from a campus building because he was a proponent of eugenics and expressed racist, sexist, and antisemitic views.

Bard, who lived from 1742 to 1821, was a pioneer in obstetrics, helped develop a treatment for diphtheria and served as the personal physician to President George Washington. In 1767, he founded what is now known as Columbia’s Vagelos College of Physicians and Surgeons.

Bard owned three people as slaves, according to the 1790 census. In 1776, he placed an advertisement in the New York Gazette offering a $10 reward for the return of a tall, thin and talkative enslaved man named James who was believed to have fled toward the East End of Long Island.

Bollinger said a panel assembled in June to study campus names and symbols associated with race and racism unanimously recommended that Bard Hall be renamed.

“We all understand how careful we need to be in shaping the environment, symbolic as well as physical, in which we ask our students to live and to call home,” Bollinger wrote in the letter announcing the change.

Excising Bard's name from the dormitory felt “especially vivid" at Columbia University Irving Medical Center, he wrote, "where the contradiction between the egalitarian health service norms they cherish and slavery’s denial of full human standing is starkly blatant and offensive.”