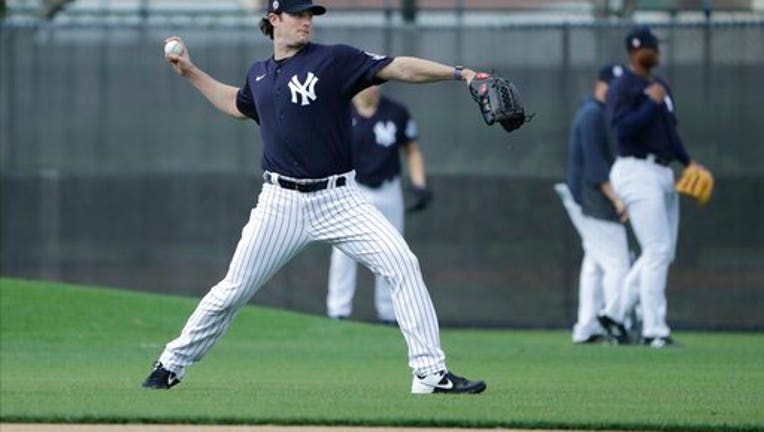 TAMPA, Fla. (AP) — On the day of his first formal workout with the New York Yankees, Gerrit Cole talked about what he did and did not know about the Houston Astros.

Houston was disciplined by Major League Baseball for breaking rules by using a video camera to steal signs during its run to the 2017 title and again during the 2018 season, the first after Cole was acquired from Pittsburgh.

New York lost to Houston in the AL Championship Series in both 2017 and against last year. Cole is ready to discuss the Astros if his new teammates inquire.

"I'll just give them an honest answer, which is I had no idea of any of it going on and I didn't see any of it," Cole said. "So, I really don't think I have much to apologize for."

Yankees manager Aaron Boone doesn't think it's necessary to talk with Cole about the lingering issue.

"He was there after a lot of the specific things that we know were going on, so no, I don't view it as anything we've got to address with Gerrit," Boone said.

Signed to a $324 million, nine-year contract, a record for a pitcher, Cole worked out Thursday on a back field with other members of New York's staff. Wearing pinstripe pants and a dark batting practice shirt with No. 45 on the back, drills included fielding grounders on the mound and throwing in the outfield.

"I've been chomping at the bit quite a bit," Cole said at a post workout news conference. "I'm just excited to get down here. Just thrilled for his new adventure. A lot of good vibes, a lot of excitement and having a good time."

Cole is focusing on this year, when the Yankees hope to reach the World Series for the first time since winning the 2009 title. New York won 103 games and the AL East last year, swept Minnesota in the Division Series, then got knocked out by Cole's Astros.

Cole hopes to win a title with the team he rooted for growing up, a club he spurned when he was first drafted in 2008 to attend UCLA.

"I love it," Cole said. “From a player's perspective, it really doesn't get much more simple than that. It's the dream to go out there every day and try to win every single time. There are a lot of moving parts and there's a lot of people that pour a lot of time into just simplifying that one theme: We need to win a world championship."