Gunman kills 5 at Colorado gay club, is subdued by patrons

Police say a 22-year-old gunman opened fire at a gay nightclub in Colorado Springs, killing five people and leaving 25 injured before he was subdued by "heroic" patrons.

COLORADO - A 22-year-old gunman opened fire inside a gay nightclub in Colorado Springs, killing five people and leaving 25 injured before he was subdued by "heroic" patrons and arrested by police who arrived within minutes, authorities said Sunday.

On its Facebook page, the club called it a "hate attack." Investigators were still determining a motive and whether to prosecute it as a hate crime, said El Paso County District Attorney Michael Allen. Charges against the suspect "will likely include first-degree murder," he said.

Police identified the gunman as Anderson Lee Aldrich, who was in custody and being treated for injuries.

Members of the LGBTQ community and beyond gathered at the Stonewall Inn on Sunday as a service originally intended for the Trans Day of Remembrance turned into one that also memorialized the victims of a mass shooting at a gay club in Colorado that left 5 dead and dozens injured.

A man with that name was arrested in 2021 after his mother reported he threatened her with a homemade bomb and other weapons, authorities said. They declined to elaborate on that arrest. No explosives were found, authorities said at the time, and The Gazette in Colorado Springs reported that prosecutors did not pursue any charges and that records were sealed. 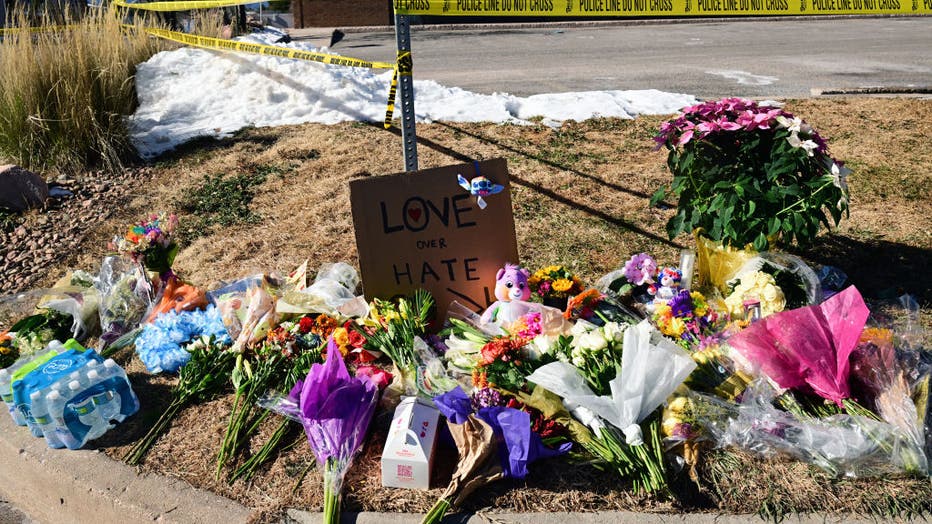 A makeshift memorial is set up near Club Q on November 20, 2022 in Colorado Springs, Colorado. An attacker opened fire in a gay nightclub late Saturday night killing five people and wounding at least 25, officials said. The club said the suspect was

Club Q is a gay and lesbian nightclub that features a "Drag Diva Drag Show" on Saturdays, according to its website. 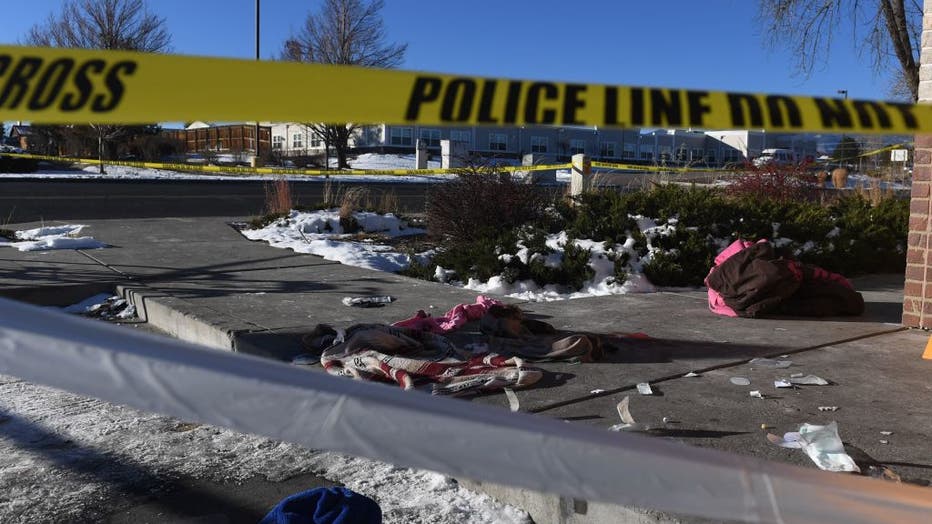 Drag events have become a focus of anti-LGBTQ rhetoric and protests recently as opponents, including politicians, have proposed banning children from them, falsely claiming they're used to "groom" children.

"Club Q is devastated by the senseless attack on our community," the club posted on its Facebook page. It said its prayers were with victims and families, and "We thank the quick reactions of heroic customers that subdued the gunman and ended this hate attack."

Authorities were called to Club Q at 11:57 p.m. Saturday with a report of a shooting, and the first officer arrived at midnight.

Joshua Thurman said he was in the club with about two dozen other people and was dancing when the shots began. He initially thought it was part of the music, until he heard another shot and said he saw the flash of a gun muzzle.

Thurman, 34, said he ran with another person to a dressing room where someone already was hiding. They locked the door, turned off the lights and got on the floor but could hear the violence unfolding, including the gunman getting beaten up, he added.

"I could have lost my life — over what? What was the purpose?" he said as tears ran down his cheeks. "We were just enjoying ourselves. We weren’t out harming anyone. We were in our space, our community, our home, enjoying ourselves like everybody else does." 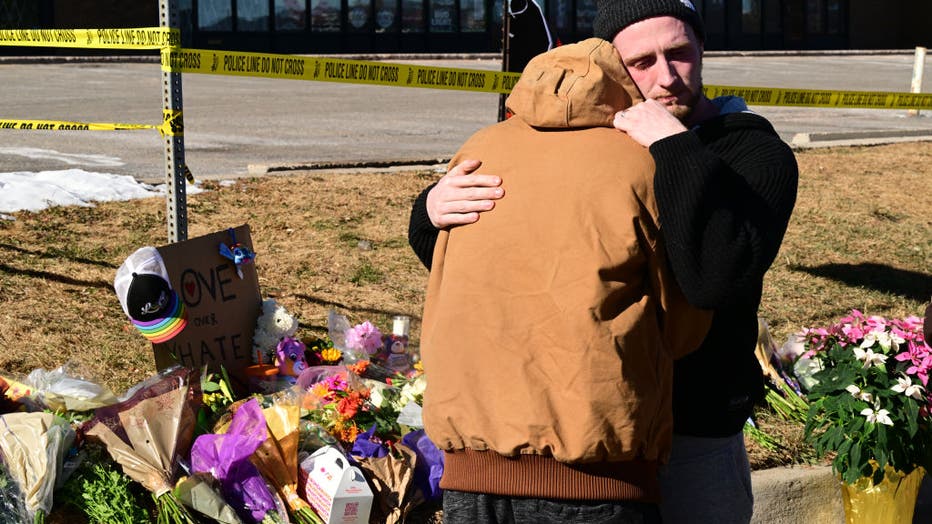 Tyler Johnston, right, comforts his friend Joshua Thurman at a makeshift memorial near Club Q on November 20, 2022 in Colorado Springs, Colorado. Thurman was inside the nightclub when the shooting happened. An attacker opened fire in a gay nightclub

The gunman was confronted by "at least two heroic people" who fought and subdued the suspect, Vasquez said.

"We owe them a great debt of thanks," he added. Detectives also were examining whether anyone had helped Aldrich before the attack, Vasquez said.

Of the 25 injured, at least seven were in critical condition, authorities said. Some were hurt trying to flee, and it was unclear if all of the victims were shot, a police spokesperson said.

The shooting rekindled memories of the 2016 massacre at the Pulse gay nightclub in Orlando, Florida, that killed 49 people. Colorado has experienced several mass killings, including at Columbine High School in 1999, a movie theater in suburban Denver in 2012 and at a Boulder supermarket last year.

It was the sixth mass killing this month and came in a year when the nation was shaken by the deaths of 21 in a school shooting in Uvalde, Texas.

Attorney General Merrick Garland was briefed on the shooting and the FBI was assisting police with the investigation. 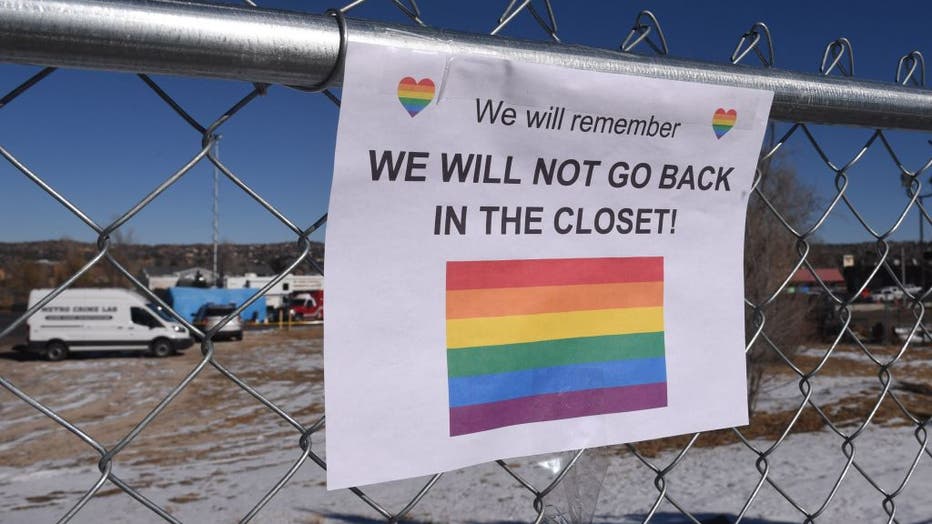 President Joe Biden said that while the motive for the shootings was not yet clear, "we know that the LGBTQI+ community has been subjected to horrific hate violence in recent years."

"Places that are supposed to be safe spaces of acceptance and celebration should never be turned into places of terror and violence," he said. "We cannot and must not tolerate hate."

Colorado Gov. Jared Polis, who became the first openly gay man in the United States to be elected governor in 2018, called the shooting "sickening."

"My heart breaks for the family and friends of those lost, injured and traumatized," Polis said. "Colorado stands with our LGTBQ community and everyone impacted by this tragedy as we mourn."

A makeshift memorial sprang up Sunday near the club, with flowers, a stuffed animal and candles and a sign saying "Love over hate" next to a rainbow-colored heart.

Seth Stang was buying flowers for the memorial when he was told that two of the dead were his friends. The 34-year-old transgender man said it was like having "a bucket of hot water getting dumped on you. ... I’m just tired of running out of places where we can exist safely."

Ryan Johnson, who lives near the club and was there last month, said it was one of only two nightspots for the LGBTQ community in conservative-leaning Colorado Springs. "It’s kind of the go-to for pride," the 26-year-old said of the club, which is tucked behind other businesses, including a bowling alley and a sandwich shop.

Colorado Springs, a city of about 480,000 located 70 miles (112 kilometers) south of Denver, is home to the U.S. Air Force Academy, as well as Focus on the Family, a prominent evangelical Christian ministry. The group condemned the shooting and said it "exposes the evil and wickedness inside the human heart."

In November 2015, three people were killed and eight wounded at a Planned Parenthood clinic in the city when authorities say a gunman targeted the clinic because it performed abortions.

The CEO of a national LGBTQ-rights organization, Kevin Jennings of Lambda Legal, pleaded for tighter restrictions on guns.

"America’s toxic mix of bigotry and absurdly easy access to firearms means that such events are all too common and LGBTQ+ people, BIPOC communities, the Jewish community and other vulnerable populations pay the price again and again for our political leadership’s failure to act," he said in a statement.

The shooting came during Transgender Awareness Week and just at the start of Sunday’s International Transgender Day of Remembrance, when events around the world are held to mourn and remember transgender people lost to violence.

In June, 31 members of the neo-Nazi group Patriot Front were arrested in Coeur d’Alene, Idaho, and charged with conspiracy to riot at a Pride event. Experts warned that extremist groups could see anti-gay rhetoric as a call to action.

The previous month, a fundamentalist Idaho pastor told his small Boise congregation that gay, lesbian and transgender people should be executed by the government, which lined up with similar sermons from a Texas fundamentalist pastor.

Since 2006, there have been 523 mass killings and 2,727 deaths as of Nov. 19, according to The Associated Press/USA Today database on mass killings in the U.S.