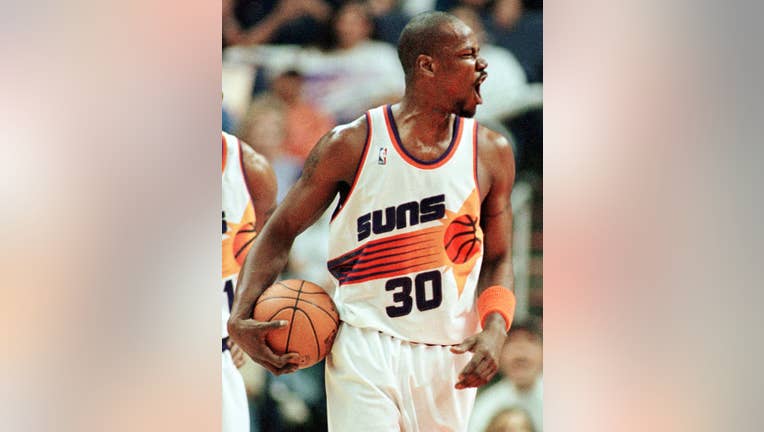 Phoenix Suns' forward Clifford Robinson reacts after the Suns scored against the San Antonio Spurs during the fourth quarter of game three of the Western Conference playoffs 29 April 2000 in Phoenix. The Suns won 101-94. (Photo by Mike FIALA / AFP) (

Hartford, Conn. (AP) - Cliff Robinson, an early star in UConn’s rise to power and longtime top sixth man in the NBA, died Saturday. He was 53.

Robinson’s death was confirmed by UConn. No cause of death was given, though former Huskies coach Jim Calhoun said Robinson had a stroke 2 1/2 years ago.

“It’s really sad to hear of this, because he was one of my kids, my players, a guy I watched grow into a man,” Calhoun said. “It’s not an easy thing.”

Clifford Robinson was born on Dec. 16, 1966, in Buffalo, New York. He was the centerpiece of Calhoun’s early teams at UConn. He played in Storrs from 1985-89, helping guide the Huskies from the bottom of the Big East to the 1988 NIT championship.

“He was our first great player,” Calhoun said. “He gave legitimacy to the program.

“As a player coming in, here’s this guy playing on TV for the Trail Blazers, watching him play, watching UConn being mentioned. You could not pay for the exposure that he gave us.”

Robinson was the NBA’s Sixth Man of the Year in 1993 and made his lone All-Star appearance the following year. At 6-foot-11, he had the size of a center but was a skilled outside shooter, a predecessor of the modern NBA big man.

He played 1,380 games in the league, ranking in the top 15 all-time. Besides the Blazers, Robinson also played for Phoenix, Detroit, Golden State and the Nets.

Robinson played for the Phoenix Suns for four seasons from 1997 to 2001.