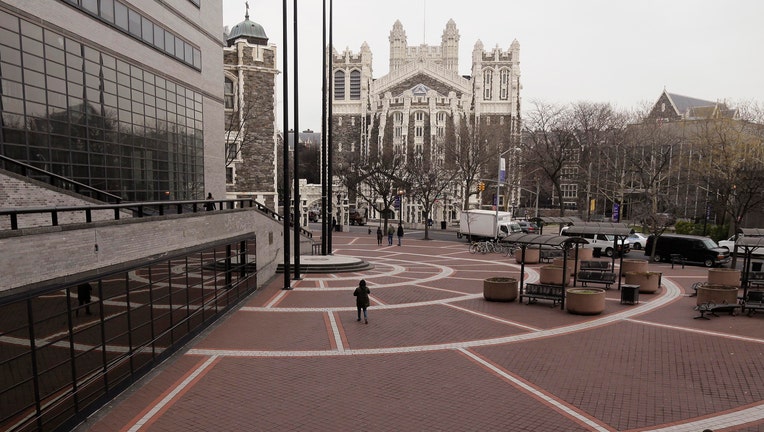 Students walk through the campus of the City College of New York, Friday, Jan. 15, 2016, in New York. (AP Photo/Julie Jacobson)

NEW YORK - The former bursar of the City College of New York has been charged with stealing almost $500,000 in student checks and spending the money on vacations and luxury goods.

Joseph Boselli, 58, was charged Tuesday with felony counts including grand larceny for allegedly stealing 900 checks that were issued to 700 current or former students.

Prosecutors said Boselli is expected to take a plea deal that would recommend two to six years in prison, the New York Daily News reported.

An attorney for Boselli declined a request for comment from the newspaper. Boselli lives in Hartsdale in Westchester County.

The checks were issued between August 2012 and September 2017 and ranged from as little as $4 to more than $3,300, prosecutors said. Boselli is accused of forging student signatures and writing, "Pay to the order of Joseph Boselli" on the backs of some checks.

Prosecutors said he deposited the money into his personal account using an ATM and spent it on flights to places like San Francisco and Milan, Italy; hotels; and luxury goods from Gucci and other stores.

"The last thing students and their families need to worry about is university employees stealing money that is rightfully owed to them."

"Many New Yorkers who take advantage of the world-class public education at their doorsteps still face enormous financial burdens thanks to the high cost of living here," Manhattan District Attorney Cyrus Vance said in a statement Tuesday. "The last thing students and their families need to worry about is university employees stealing money that is rightfully owed to them."

Vance’s office and the state inspector general’s office started investigating Boselli in 2017. He was placed on administrative leave that year and fired in 2019.