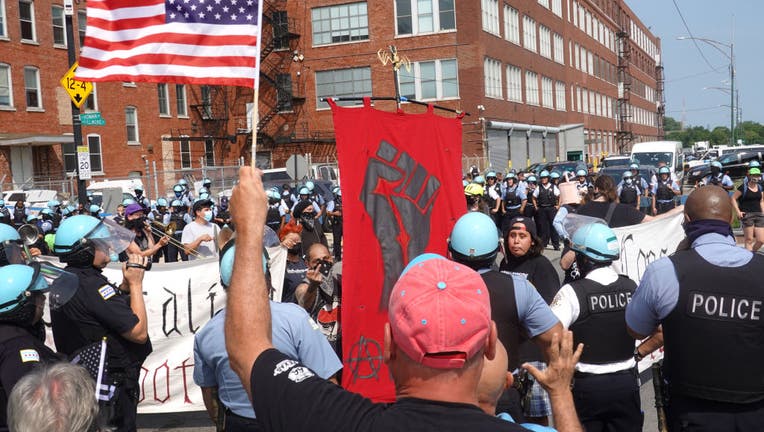 Police separate pro and anti police demonstrators during a protest on August 15, 2020 in Chicago, Illinois. The demonstration was one of several in the city today, either in support of or in opposition to police. (Photo by Scott Olson/Getty Images)

CHICAGO (AP) - A day of largely peaceful protests against racial injustice and police brutality ended in violent skirmishes between demonstrators and police in downtown Chicago, with two dozen arrests and multiple injuries.

Chicago Police Department Superintendent David Brown said a march started around noon Saturday and began peacefully, but a separate demonstration broke off resulting in two dozen arrests, 17 injured police officers and at least two injured protesters. None of the injuries were believed to be life threatening.

At the same time, activist groups and some elected officials called out police for using aggressive tactics, including spraying the crowd with a chemical irritant and striking protesters with batons.

“The march was peaceful until CPD and other law enforcement agencies began an all-out assault on protesters,” said a Sunday statement from youth activist group Increase The Peace.

A group of elected officials, including state Sen. Robert Peters, state Rep. Lakesia Collins and Alderman Byron Sigcho-Lopez, all Chicago Democrats, blasted the department for the heavy police presence and their tactics.

“We once again condemn Mayor Lightfoot and Superintendent Brown for their use of police force against these demonstrators on Saturday night, and for the continued escalation of surveillance, violence, and detention of protesters," said a Sunday statement from the group.

Earlier Saturday, the march against police brutality followed a route near the Dan Ryan Expressway after police blocked the group of about 200 people from getting on the expressway.

The march came about a week after a police shooting of a black man in the Englewood neighborhood on the city’s South Side prompted large crowds of people to go to the downtown shopping area, where they smashed windows of dozens of businesses and took merchandise from stores.