Chicago murder rate cut ‘roughly in half’ since before Operation Legend: AG Barr

Attorney General Barr says Chicago's murder rate has been cut roughly in half since before Operation Legend.

U.S. Attorney General William Barr said during a Wednesday morning press conference in the Windy City that the federal program had helped decrease Chicago's murder rate to the lowest it's been "at any time" since April, cutting the rate "roughly in half since before the operation."

Chicago murder rate cut ‘roughly in half’ since before Operation Legend: AG Barr

The federal government through Operation Legend has

"The results of those actions speak for themselves: over the first five weeks of Operation Legend in Chicago, murders dropped by 50% over the previous five weeks. August ultimately saw a 45% decrease in murders compared to July, and a 35% decrease compared to June," he said.

At least 400 federal agents have been assigned to the Illinois city as part of Operation Legend – roughly 200 of whom were already working there, but whose roles were repurposed, and the remainder being deployed from elsewhere – and over one-thousand in total have been dispatched nationwide.

Mayor Lori Lightfoot, a Democrat, and Chicago Police Superintendent David O. Brown were not in attendance for Wednesday's press conference, though they were invited, Barr said.

Barr later added that the decrease in Chicago's murder rate cannot only be attributed to Operation Legend but noted: "I believe that it is an important part of that drop."

"Operation Legend's success is perhaps most dramatic here in Chicago," Barr said. "When the operation was announced on July 22, homicides in the city were up 51% over 2019. Over the previous weekend, more than 60 people had been shot in Chicago, with over a dozen fatalities." 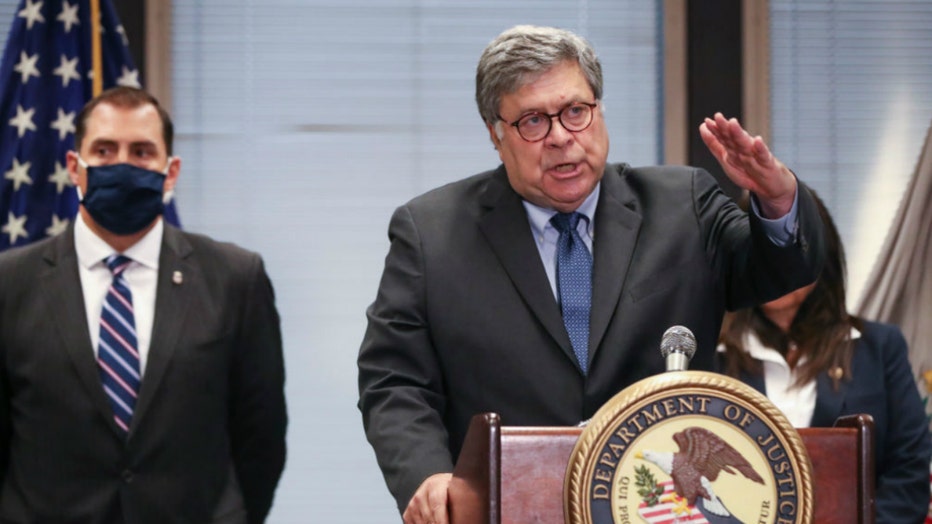 Throughout the country, more than 2,500 people have been arrested and 600 are facing federal charges.

"Bringing federal charges is significant because defendants arrested for violent crimes are often detained before trial, unlike state defendants who are too often released," he said. "In addition, federal defendants will face serious sentences if convicted, with a real possibility of long-term imprisonment ... knowing that, many of the arrestees cooperate with the government and lead to even more violent offenders."

Operation Legend is an ongoing government effort to combat surging crime in parts of the country, officials announced Wednesday.

The operation began in July, shortly after 4-year-old LeGend Taliferro, for whom the program is named, was fatally wounded in Kansas City, Mo. while he was sleeping after he was struck by a bullet meant for somebody else.

"The increase in violence that has plagued Chicago and other cities is what prompted the department to launch Operation Legend two months ago in Kansas City, Mo.," Barr continued. "The purpose of the operation was to make clear that his life mattered, his name should be remembered and other innocent victims like him, including the 8-year-old girl killed in Chicago on Labor Day, should not suffer such senseless death."

In addition to Kansas City, where it was started, Operation Legend has been expanded across eight cities: Albuquerque, Chicago, Cleveland, Detroit, Indianapolis, Memphis, Milwaukee, and St Louis.

Barr said violent crime in Kansas City decreased by 32% since the operation's launch, with murder dropping by 18% and aggravated assault down 47%.

Murders in Detroit have dropped by more than 25%, while non-fatal shorings, he said, have decreased by more than 45% since the operation began seven weeks ago.