U.S. economists say consumer prices will continue to rise in the country.

WASHINGTON (AP) - Contrary to popular belief, there has been no great migration in the U.S. during the pandemic.

New figures released Wednesday by the U.S. Census Bureau show that the proportion of people who moved over the past year fell to its lowest level in the 73 years that it has been tracked, in contradiction to popular anecdotes that people left cities en masse to escape COVID-19 restrictions or in search of more bucolic lifestyles.

"Millennials living in New York City do not make up the world," joked Thomas Cooke, a demographic consultant in Connecticut. "My millennial daughter’s friends living in Williamsburg, dozens of them came home. It felt like the world had suddenly moved, but in reality, this is not surprising at all."

In 2021, more than 27 million people, or 8.4% of U.S. residents, reported having moved in the past year, according to the Current Population Survey Annual Social and Economic Supplement.

Besides giving rise to shelter-in-place restrictions, the COVID-19 pandemic may have forced people to postpone life-cycle events such as marriages or having babies that often lead to moves. But the decline is part of a decadeslong migration decline in the U.S., said William Frey, a senior fellow at The Brookings Institution.

"These numbers show a lot of people didn’t move or moved at a slower rate," Frey said. "But it’s a longer-term trend."

That's not to say that nobody moved. The one uptick in mobility patterns last year took place in longer-distance moves, from state to state, compared to moves within a state or county. Those 4.3 million residents who moved to another state may have done so because of the pandemic, Frey said.

Demographic expert Andrew Beveridge used change-of-address data to show that while people moved out of New York, particularly in well-heeled neighborhoods, at the height of the pandemic, those neighborhoods recouped their numbers just months later. Regarding the nation as a whole, Beveridge said he's not surprised migration declined. 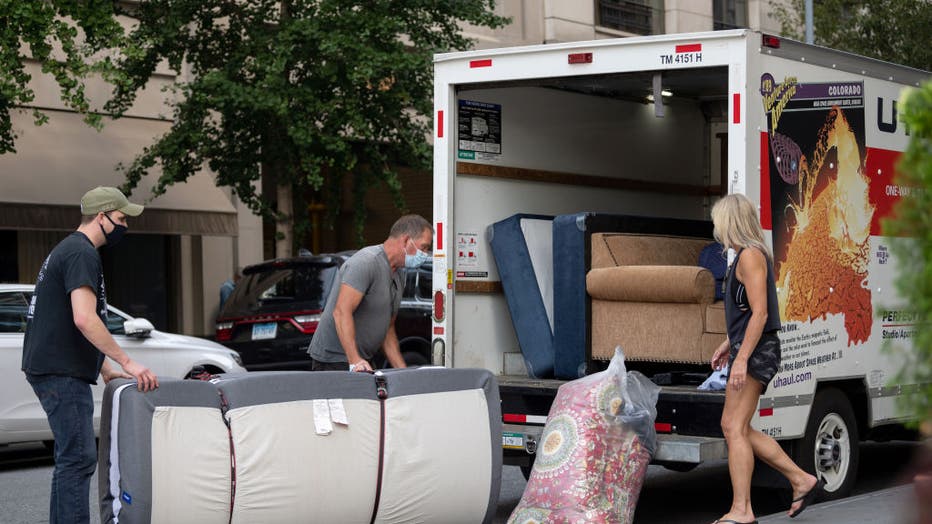 People wearing masks load furniture into a U-haul moving truck as the city continues Phase 4 of re-opening following restrictions imposed to slow the spread of coronavirus on September 12, 2020 in New York City.

"The same thing happened during the financial crisis. Nobody moved. Nobody got married. Nobody had kids," said Beveridge, a sociology professor at Queens College and the Graduate School and University Center of the City University of New York. "All demographic change sort of just screeches to a halt."

Other factors contributing to Americans staying put have been an aging population, since older people are less likely to move than younger ones; the ability to telecommute for work, which allowed some workers to change jobs without having to move; and rising home prices and rents that kept some would-be movers in place, demographers said.

"I think the boom in remote work because of COVID coupled with the economic shock is the big reason," said Mary Craigle, bureau chief for Montana's Research and Information Services.

Mobility in the U.S. has been on a downward slide since 1985 when 20% of U.S. residents moved. That was an era when Baby Boomers were young adults, beginning careers, getting married and starting families. In comparison, millennials, who today are in the same age range as their Baby Boomer cohorts were in the mid-1980s, are stuck in place due to high housing costs and underemployment, according to an analysis Frey did last year.

Advancements in telecommunications and transportation have contributed to the decadeslong decline in U.S. mobility. Nowadays, people can get an education, work and visit family and friends remotely. In the last half of the last century, the highway system allowed people to work 50 miles (80 kilometers) from their homes without having to move closer for work, said Cooke, a professor emeritus at the University of Connecticut.

Rising economic insecurity over the decades also has made U.S. residents less mobile since "when there’s insecurity, people value what they already have," he said.

The slowdown in American mobility is part of a recent stagnation in population dynamics in the U.S. The 2020 census shows that the U.S. grew by only 7.4% over the previous decade, the slowest rate since between 1930 and 1940. Earlier this week, the Census Bureau revealed that the population center of the U.S. moved only 11.8 miles (19 kilometers), the smallest shift in 100 years.