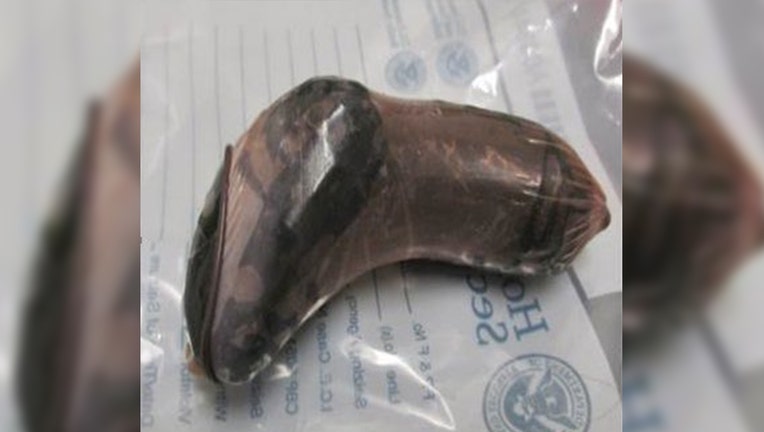 A woman allegedly tried to cross the border with a condom filled with fentanyl pills in her vaginal cavity, CBP said.

EL PASO, Texas - A woman was arrested after U.S. Customs and Border Protection officers found 0.006 pounds of fentanyl that was wrapped inside a condom the woman placed inside her vaginal cavity.

Officers were working at the Bridge of the Americas border crossing when they located the 40-year-old woman. Following a pat-down search and a CBP canine alert, the woman voluntarily removed a condom filled with fentanyl pills from her vaginal cavity.

She was just one of many who were arrested during a narcotics bust along the border.

In total, 25 people were arrested over the last week and officers seized cocaine, methamphetamine, and fentanyl.

On May 9, CBP officers working at the Paso Del Norte border crossing intercepted 24.47 pounds of methamphetamine from a 24-year-old man. Following a canine alert and x-ray scan, officers then discovered 24 bundles hidden throughout the vehicle.

Later that day, officers intercepted 18 pounds of methamphetamine from a 23-year-old woman. Officers then discovered a total of eight bundles hidden within the spare tire of the vehicle.

On May 11, CBP officers intercepted 19.7 pounds of cocaine. And a few days later officers working at the port of Santa Teresa, New Mexico intercepted 39.24 pounds of methamphetamine.

Officials say they located multiple bundles hidden in a car that arrived from Mexico.

The people mentioned above, who were arrested, were all U.S. citizens.

"Our CBP officers continue to secure our borders and safeguard our communities," said CBP El Paso Director Field Operations Hector A. Mancha. "They are dedicated to stopping the flow of these dangerous drugs from coming into our county and working closely with law enforcement agencies to bring fugitives to justice."