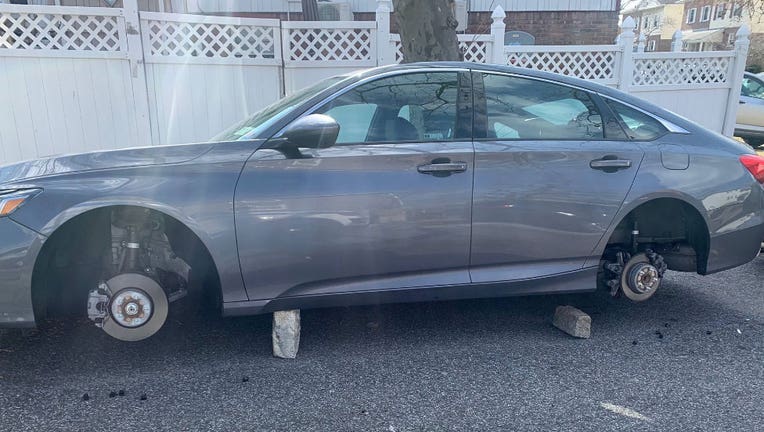 NEW YORK - Cars left up on blocks were a common sight in the "bad old" days of New York City.  Now, there are warnings that the crime is returning to the city.

The largest police union in the city says that wheel thefts are becoming a nightly occurrence again.

Earlier this week, police in South Queens issued a warning about stolen wheels.  The 105th recommended residents get wheel locks and to turn the wheels all the way to the right or left when parking to make it more difficult to fit tools in the wheel well.

It's not just in Queens.  Thieves have been targeting rims and tires on Staten Island.  Honda Accords seem to be the most common cars that are hit.

Many of the tires end up in "chop shops" that sell stolen or used auto parts.

And according to the FBI, in 2016 alone, there were 366,048 thefts of motor vehicle accessories across the country.  It was unclear how many of those larcenies were wheels and tires.

While wheel and tire thefts are becoming more sophisticated, one other easy suggestion is to park your car as close to the curb as possible.  Thieves may move onto an easier target if they don't have a lot of space to work with to steal the wheel.